The District Court in Atlanta said on Monday it sentenced a US-born former high school football player who joined a Mexican drug cartel to 49 years in prison for cocaine trafficking and money laundering. 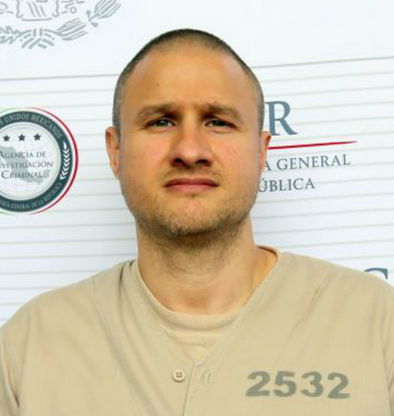 Caldez-Villarreal at his extradition in 2015 (From: Agencia de Investigacion Criminal)Edgar Valdez-Villarreal, 44, known as “La Barbie” because of his fair complexion, started dealing drugs while a linebacker in his hometown high school in Laredo, Texas, according to prosecutors.

“Valdez-Villareal imported tons of cocaine into the U.S. while ruthlessly working his way up the ranks of one of Mexico’s most powerful cartels, leaving in his wake countless lives destroyed by drugs and violence,” said U.S. Attorney Byung J. “BJay” Pak.  “He will now go to federal prison for nearly the rest of his life. The highest levels of Mexican drug cartel should know that, like La Barbie, they will be held accountable for their crimes.”

Valdez-Villareal climbed the ranks of the Beltran Layva cartel when the gang was associated to Joaquin “El Chapo” Guzman and the Sinaloa Cartel.

He was sentenced to serve 49 years and one month and ordered to forfeit US$192 million - a sum prosecutors estimate the cocaine he imported into the US was worth.

Valdez was known for wearing flashy suits, owned luxury homes and a ranch with a zoo that housed a lion, The Associated Press reported.

While building out a media image of a flashy lifestyle, he also used ruthless violence to squash his rivals, secure drug trafficking routes and rise to the top of the cartel.

His family, however, pleaded for leniency in court.

One of his six sisters, Carla Valdez, herself a prosecutor in Texas, told Judge William Duffy that they were raised on strong values and morals by their humble, hard-working parents.

Even though she acknowledged that her brother strayed from that path, she also insisted he is a good person, which Duffy had a hard time understanding.

“Why are you a prosecutor and why is your brother a seriously evil criminal?” he asked the kingpin’s sister.

Carla Valdez replied that is a question her family asks every day, according to the agency.

When cartel leader Arturo Beltran Leyva was killed by Mexican marines in December 2009, Valdez entered a war with Leyva’s brother that left dismembered and decapitated bodies on the streets or dangling from bridges in Cuernavaca and Acapulco in South Mexico.

When Valdez was arrested in 2010 at a vacation home hidden in the woods near Mexico City, then-Mexican President Felipe Calderon said he was “one of the most-wanted criminals in Mexico and abroad.”

He was among 13 people extradited to the U.S. from Mexico in September 2015. He pleaded guilty in January 2016 to charges of conspiring to import and distribute cocaine and conspiring to launder money.

After being charged in Atlanta, Valdez was extradited to the U.S. in 2015 along with other defendants, including drug cartel figure, Carlos Montemayor Gonzalez.

“Valdez and Montemayor are charged with leading the efforts for a top Mexican cocaine cartel with sending drugs into the United States while funneling millions of dollars in cash back into Mexico,” said U.S. Attorney John Horn in a 2015 statement.

“Given Atlanta’s status as a distribution hub for the Mexican cartels, this case demonstrates our commitment to work internationally and include the cartels’ leadership in our cases,” he added.

Valdez pleaded guilty to charges of cocaine importation and distribution, and money laundering in 2016.