A Vietnamese court is expected to set precedent on Tuesday by determining who will bear financial responsibility in a record-setting fraud trial, Reuters reported Monday. 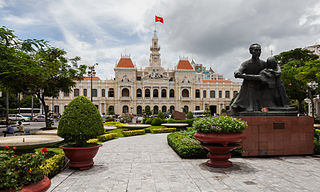 Ho Chi Minh City Hall (Diego Delso, CC BY-SA 4.0)The Ho Chi Minh City People’s High Court will decide whether to uphold a lower court’s ruling that the main perpetrator of the country’s largest-ever case of embezzlement will be required to return a portion of the stolen US$215 million, rather than the individual's employer at the time, state-controlled VietinBank.

Interpretation of liability law is less stringent in Vietnam than in many other countries, Reuters reported, where banks can be held liable for theft if negligence is established.

“Different understandings lead to different decisions,” the chairman of a Hanoi-based law firm SBLAW told Reuters. “Vietnam doesn’t have case laws for such cases so it depends completely on the mind of the jury.”

Huynh Thi Huyen Nhu, a former senior manager at VietinBank, and 22 accomplices were convicted in 2014 for misappropriating funds from 15 victims in 2010 and 2011. According to the indictment, Nhu used her title to encourage customers to deposit money at a particular branch, where she and her collaborators would use counterfeit documents to drain the accounts.

Nhu was was sentenced to life imprisonment.

The chief executive of one victim, Saigonbank Berjaya Securities JSC (SBBS), told Reuters that upholding the lower court’s ruling may have disastrous consequences for her bank, as she had little hope of Nhu repaying the $10 million stolen from her firm.

“We can’t afford to lose the case,” the SBBS executive, Josephine Yei, said. “This represents 70 percent of our capital. Our business may get suspended.”

SBBS and four other victims brought the latest appeal, which only covers some $44,000,000 of the broader case.

The court’s ruling comes at a lively, yet delicate time for the emerging Vietnamese economy, which is handling an influx of investment banks and global buyout funds hoping to capitalize on a period of privatization and capital-raising deals.

“This case should be handled under international practices, otherwise it could have a bad effect on Vietnam’s investment and business environment and then investors will lose trust,” economist and former government advisor Le Dang Doanh told Reuters “We have to avoid that. We have to create trust.”