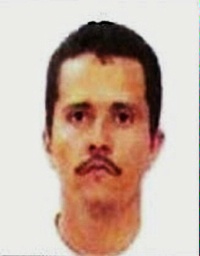 Nemesio Oseguera Cervantes (US State Department)Nemesio “El Mencho” Oseguera’s drug cartel is behind the surge in heroin shipments to the United States, according to authorities. The Jalisco New Generation Cartel is considered to be the most powerful Mexican drug gang and is active in the US, Latin America, Africa, Europe and Asia.

The drug baron became the most wanted cartel leader after Joaquin “El Chapo” Guzman was extradited to the US in 2017. Oseguera was named public enemy number one in March 2018 by US agents who said his gang used extreme violence to gain control of the heroin trade.

Marines detained Oseguera’s wife, Rosalinda Garcia, in the suburbs of Guadalajara after a court issued an arrest warrant for money laundering and involvement with organized crime.

The US is offering US$5 million for information leading to the capture of the drug baron.

Murder rates in Mexico have been the highest on record since Oseguera started fighting Guzman’s Sinaloa cartel and other drug gangs to control drug routes to the US.

Since the January launch of operation Titan Shield, aimed at reducing violence in the worst-hit parts of the country, nearly 1,800 criminals have been caught, said Navarette.

He said kidnapping rates had declined and that murder rates in the tourist resort of Los Cabos had dropped significantly.

Government data, however, shows that murder investigations across Mexico have been rising in the first four months of 2018. With 8,900 investigations, there has been increase of 17 percent from the same period last year.