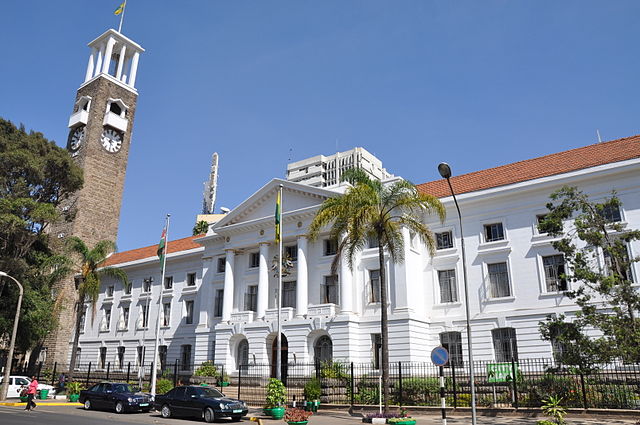 Nairobi City Hall (Source: Jorge Láscar, CC BY 2.0)The money had allegedly been stolen from the National Youth Service, NYS, through phony invoices and multiple payments on one supplier invoice, local media reported.

The agency is in charge of training young people and deploying them to construction, agriculture, slums upgrade and similar projects.

The director of NYS, Richard Ndubai, and a top official at the Ministry of Public, Youth and Gender services, Lillian Mbogo-Omollo, are among the 20 people in custody, according to privately owned K24 TV and Citizen Television.

Prosecution of all suspects named in the investigation will begin immediately, Kenya's chief prosecutor said.

“The [Director of Public Prosecutions] has independently reviewed all the Inquiries Files related to the ongoing Investigations at #NYS and has directed prosecution commences immediately against all the named suspects,” the DPP said via Twitter.

A full list of names has not yet been made public.

Last week, investigators questioned over 40 people, including Nduba, over the missing funds.

The stated mission of NYS is “to mould the youth into a pool of disciplined and organized manpower, through participation in socio-economic development activities and vocational training.”

The current scandal hounding NYS echoes a previous controversy involving the organization from 2015, when some $8 million of public funds was said to have been stolen by officials.

Kenyan President Uhuru Kenyatta has repeatedly pledged to tackle corruption since taking office in 2013, but critics have not been satisfied with his rate of progress. According to Reuters, anti-corruption advocates say only high profile convictions will break the so-called “culture of impunity.”

In 2016, the head of Kenya's anti-graft agency told Reuters the country was losing a third of its state budget to corruption every year.