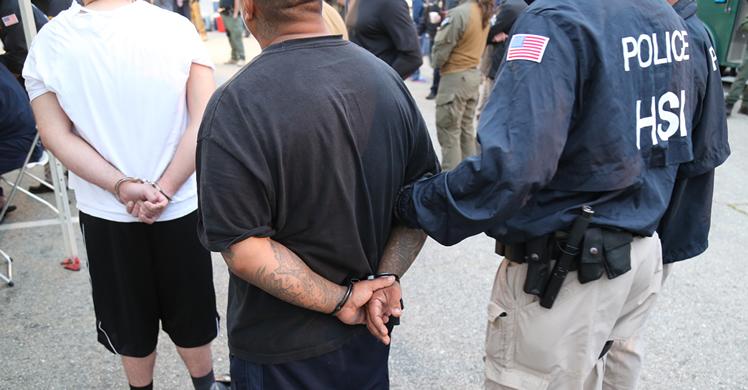 Mexican Mafia arrests in 2016 (From US Immigration and Customs Enforcement)Operation Dirty Thirds included more than 500 law enforcement personnel who brought in 32 defendants on racketeering charges. The federal indictment named 83 people, 35 of whom were already in custody and another 16 who are “expected to be arrested in the near future,” the Justice Department said.

The racketeering indictments detail the violent control the Mexican Mafia has been exerting inside Los Angeles County jails and over Latino street gangs in Southern California.

The gang members smuggled drugs into the jails, controlling and taxing the sales of methamphetamine, heroin, cocaine and cannabis, extorting inmates and laundering their profits.

One third of all drugs smuggled into the jails had to be turned over to a Mexican Mafia member or his shot-caller in each facility and if the gang member decided to sell his “thirds,” all other inmates had to hold off their sales.

All Latino inmates had to give the gang a percentage of what they spent on food and hygiene items in the canteen. The gang then sold this “kitty” to inmates for additional income.

The Mexican Mafia also used assault and fines to discipline inmates that violated its rules.

One indictment focused on Michael “Pomona Mike” Lerma who allegedly exercised control over and extorted drug proceeds from Latino street gangs in Pomona as well as from incarcerated Latinos. His gang also allegedly engaged in robberies, identity theft, drug trafficking and kidnapping.

Lerma was in jail during his alleged reign over the Pomona gang and “top-level female associates known as “senoras” deposited proceeds into his prison account,” according to the indictment

“Gang violence in the jails also spills over to the streets and adversely affects our communities,” said Paul Delacourt, the assistant director in charge of the FBI’s Los Angeles Office. “This three-year investigation focused on players at all levels for their role in the conspiracy – from the shot-caller, to the secretary, to the dealer, to the smuggler.”

The arrested members allegedly sanctioned murders and assaults and orchestrated kidnappings of relatives of anyone who defied them.

“If convicted, most of the defendants could be sentenced to decades in federal prison, and some could face life without parole,” the statement said.