Sicilian authorities that have been fighting the Cosa Nostra for decades are facing a new type of organized crime: a Nigerian sex and drug trafficking gang called Black Axe, NPR reported Wednesday. 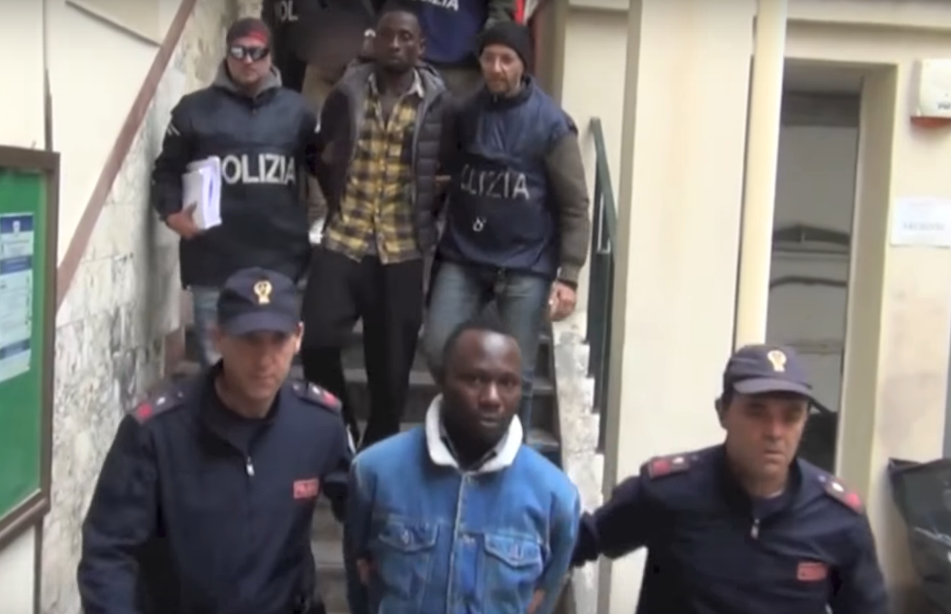 Black Axe members are arrested (Polizia di Stato)After the Cosa Nostra in Palermo had been weakened by police, the Black Axe swooped in. A bloody war between authorities and mafia in the 1990s followed by a crackdown on its leading figures created an opening for new criminal groups to take over.

"The Nigerian organizations have settled in places where mafia groups don't have complete control," said Cesare Sirignano, a magistrate at the National Anti-Mafia Directorate.

As long as they give the original gangsters a cut or “pizzo” of their drug and prostitution profits and don’t encroach on the mafia’s businesses, “the presence of the Nigerian gangs isn't a problem for the Italian mafia groups," Sirignano said.

In Palermo, Black Axe operate from the Ballaro neighborhood, home to the city’s oldest market where the air is filled with vendors screaming in thick Sicilian accents and the smells of fresh produce, meat, fish, olives and cheese.

But that is not the only place where you can get a taste, or “un assaggio.”

The Nigerian gang uses the neighborhood’s historic but rundown houses to hold the women, and sometimes underage girls, whom they force to prostitute themselves on the city streets.

"We have shut down several houses ... most of them rundown, some of them entire old buildings in bad shape in Ballaro ... where these girls would be forced into prostitution," said former Palermo police officer Carmine Mosca.

On promises of good jobs, Nigerian women have been trafficked to Italy since the 1980s but there has been a spike in recent years.

The International Organization for Migration said that in 2016 and 2017, the main nationality of people arriving by sea was Nigeria.

They estimate that 80 percent of Nigerian women arriving in Italy are potential trafficking victims and said the number of minors is increasing.

While authorities have the tools, such as anti-mafia laws, to combat new crime groups from their fights against local mafia, the same long struggle has made some cities more susceptible to organized crime newcomers, Sirignano said.