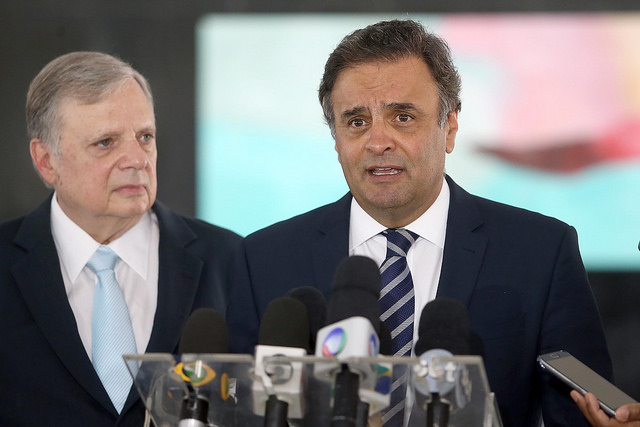 Senator Aecio Neves was charged with corruption and obstruction of justice. (Source: Aecio Never Flickr, CC BY 2.0) The decision comes as another blow to Neves, as he was the leader of the Brazilian Social Democracy Party (PSDB) prior to the corruption scandal. His political career was well established as he is the grandson of Tancredo Neves, the first president elected after the 1970s-80s military dictatorship.

The court ruled unanimously that the case presented by prosecutors against the former centrist party leader will go to trial. Neves is accused of accepting a US$587,000 bribe from the former CEO of the world’s largest meatpacking company, JBS SA.

The former CEO, Joesley Batista is also in jail awaiting trial on charges of obstruction of justice and insider trading.

According to Reuters, Batista taped Neves asking for money to defend himself from corruption allegations, which he later gave to the prosecutors as part of a plea deal. Neves’ lawyer argues that this evidence should be dismissed as it constitutes entrapment for the purpose of acquiring a plea bargain for Batista.

Police however, also obtained a video showing a director of a Batista-family owned company handing an undisclosed amount of money to Neves’ cousin, who was his campaign treasurer during his 2014 presidential election bid.

The ruling is also a thorn in the side of the PSDB, which is already behind in opinion polls with only 6 percent of those surveyed saying they would vote for their candidate. The presidential elections are scheduled for October.