Police in Osaka arrested on Tuesday four gang members, including their boss, during a raid of an office linked to a yakuza clan, according to the Tokyo Reporter. 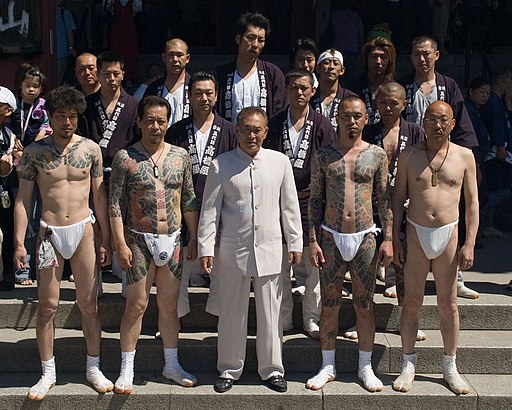 Yakuza at the Sanja Matsuri Festival (From: Jorge, CCA 2.0)The four were arrested for allegedly assaulting rival gangsters.

They broke the nose of the gang’s 69-year-old boss and injured two others.

Right before the attack, the rivaling gang members had visited Suda’s office to discuss an illegal casino, according to the police.

Japan’s National Police Agency recently announced that the number of yakuza members is the lowest in years, with 345,000 people involved in yakuza syndicates.

This is the lowest number since the NPA started counting yakuza member in 1958, according to the Japan News.

The statistics, however, might not illustrate that there are less criminal organizations but rather show a shift in affiliations, Asia Times reported Wednesday.

Regulations in 2010 and 2011 that targeted the shaking down of businesses – historically the yakuza’s main source of income – made it illegal to hire, share profits or pay yakuza members. The measures even made it difficult for members to rent apartments or get cellphone contracts.

From then on, more yakuza decided to become independent and forego of their affiliation with the yakuza brand. The fearsome reputation that came with the name no longer weighed up against the judicial scrutiny the affiliation brought as well.

When the boss of the Yamaguchi-gumi, Shinobu Tsakusa, was released from prison in 2011 and asked about the new regulations he simply replied: “We’ll adjust.”

The yakuza, like many criminal organizations across the world, have shifted to legitimate businesses.

While yakuza activity used to be linked to hostess clubs, strip clubs and sex shops, they have infiltrated other parts of Japan’s economy since the 1980s. Nowadays they are active in every sector. Many members are not tattooed men with missing fingers but businessmen who often work together with politicians and the financial elite.

Tokyo real estate developments, for example, are often operated by yakuza affiliates. Yakuza also have a big hand in solar energy and nuclear industry, where they work as labor dispatchers. Nuclear workers are not subject to background checks in Japan.

The regulations that hit the tough gangsters at the bottom ranks of the organization have not afflicted its higher tier members, who made a lot of money from the cleanups after the 2011 earthquake and tsunami.