US prosecutors charged nine suspected members of the Kensington area “TruHittaz” drug trafficking group with 44 counts of conspiring to distribute and selling phencyclidine, also known as PCP or angel dust, and crack cocaine, according to a Department of Justice announcement on Friday. 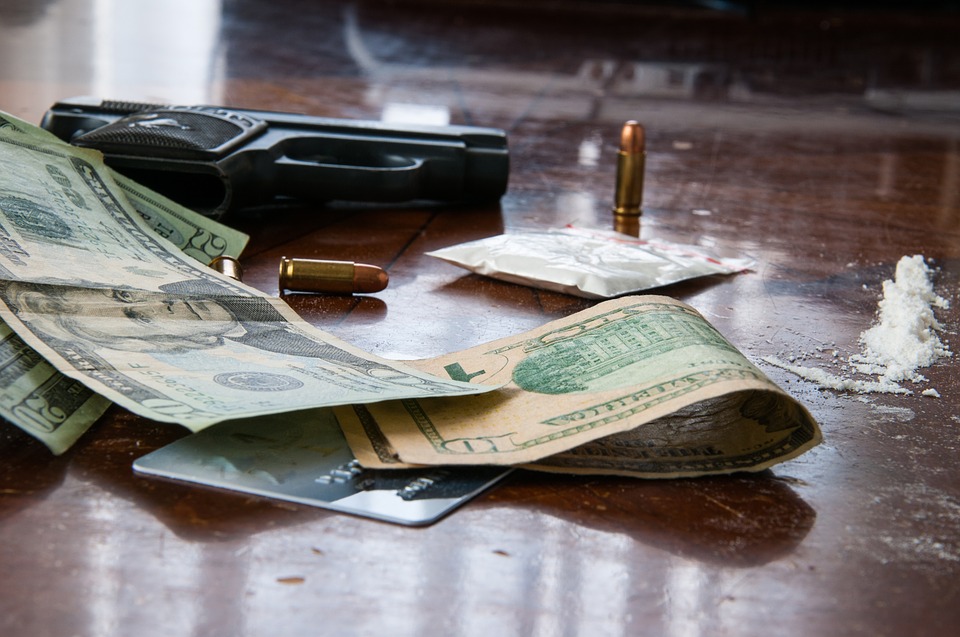 Gun Money Crime (Pixabay CC0 Creative Commons)The suspects, aged 21 to 29, and known by their nicknames “Speedy,” “ODOG,” “Butterknife King,” “SnoopdaHitta,” “Bear,” “Skee,” “Weez,” “Dudda” and “Turk,” were also charged with maintaining a drug house and the possession, use and carrying of firearms while dealing.

The name of the gang and the nicknames of some of the members bear a striking resemblance to those of the North Philadelphia rap group Tru Hittaz which has released mixtapes, video interviews and music videos and performed at the 2015 SXSW Festival in Austin, Texas.

Butterknife King, who has also released a solo album, has an Instagram profile showing large amounts of cash, a currency counter and packaged drugs.

The AllMusic page for Butterknife King’s “Trap Trap” album lists Andrew Gault as the composer, which is the same name found on the Department of Justice press release. OCCRP has not been able to confirm whether the members of the rap group are part of the drug trafficking group.

U.S. Attorney McSwain called the gang an “organized, methodical and violent group of drug dealers who used force to protect their business and their turf.”

The TruHittaz allegedly operated 24/7 in what they called the “the jungle” of the 700 and 800 blocks of East Willard and East Madison Streets, where they sold PCP, crack, heroin and marijuana.

“This organization and others like it effectively hold neighborhoods hostage,” McSwain said. “If law abiding citizens are going to live without fear, we have to do everything possible to shut these organizations down.”

The two-year-long investigation uncovered a clear hierarchy in the “trapping” organization that had developed its own jargon.

At the top are the “bosses” or “shot callers.” They supplied the drugs, set the prices and received payments. “Lookouts” watch for cops and alert other members. “Trappers” sell drugs on the blocks and “caseworkers” overlook and supervise those sales.

Each part of the organization worked in 12-hour shifts, from 10 to 10.

They allegedly kept bulk quantities of the drugs in “trap houses,” where they also kept their profits and guns. To pick up the drugs and money, they drove around in a black SUV, a dark-blue Dodge Charger, a maroon van and two silver luxury sedans; a Lincoln MKS and a Chrysler 300.

The gang worked with logos and hand signals – forming an “H” with their fingers –  to denote their membership. They also had code language for the drug game. “Hard” or  “the ball game” refers to crack. A packet of crack is called a “dime” or “basketball,” while “oranges” refers to larger quantities.

Cigarettes dipped in PCP are known as “dippers.” Liquid PCP – “wet” or “water” – comes in different quantities: “fat bitches,” “a hizzy,” or a “soda.”

Marijuana is called “soccer balls” and heroin are “footballs.”

TruHittaz code includes terms to distinguish forms of police presence. “Mayback” are cops in cars. “Rollovers” refers to police officers on bicycles and “Phantoms” are officers on foot.

The gang allegedly used counter-surveillance tactics to prevent detection including social media and disposable cellphones – “burners” – that they discarded every two to three weeks.

The TruHittaz trap game started from US$ 10 bag of “hard” up to bulk quantities of crack. When selling together, the members would get profits from the sale relative to their contribution.

“All members of the TruHittaz DTG, regardless of their role at a given time, were paid in proportion to the amount of drugs sold on a given shift, so that the higher the quantity of drugs sold, the higher the profit each member received,” the press release stated.

Besides using guns – “tools,” “gats,” or “ratchets” – to protect their turf, the gang also used force against other TruHittaz members or “taxed” them to make sure the operation was running as they wanted.