Slovak crime boss Robert Okolicany fled the country hours after the Supreme Court sentenced him and two of his associates to life for several crimes including murder, Aktuality reported Thursday. 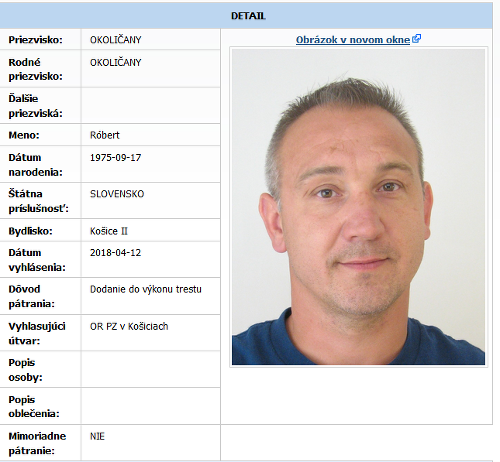 Robert Okolicany (Photo: Police Slovakia)After pronouncing the sentence, the court sent an arrest order to the police by fax. By the time the police arrived to execute the order, Okolicany was gone although he had been in the country earlier that day.

Apart from the alleged boss of Eastern-Slovak mafia, the court sentenced Robert Nigut and Jaroslac Potucko, however, Nigut has been on the run since 2012.

The three men were among 16 defendants tried for 20 crimes, including multiple murders, blackmail, robbery, theft, possession of concealed weapons, and the creation of a criminal and terrorist group.

One of the defendants, Roman Dunak, was acquitted, the remaining 12 were given jail sentences ranging from 18 months to 24.5 years.

The three life sentences were issued for four counts of murder, three murder attempts and other violent crimes.

The verdicts are effective and cannot be appealed, concluding an indictment filed more than ten years ago that lead to around 130 court sessions.

Okolicany thought Ferenc was working for the police, something which Ferenc’s parents also claim. Okolicany killed Ferenc in his kitchen on April 7, 2001 with a single shot to the back of the neck while they were drinking wine.

Next was Marek Adam, an underworld figure who was shot on November 11, 2001 in the parking lot of the Twister night club in the eastern Slovakian town of Moldava nad Bodvou.

There are 30 people in Slovakia who are supposed to be in custody under maximum security but are not, Dennik N reported.