Prime Minister Dmitry Medvedev promised on Monday to help Russian companies targeted by US sanctions with the creation of two jurisdictions with special tax rules in Russia, similar to offshores, Vedomosti reported. 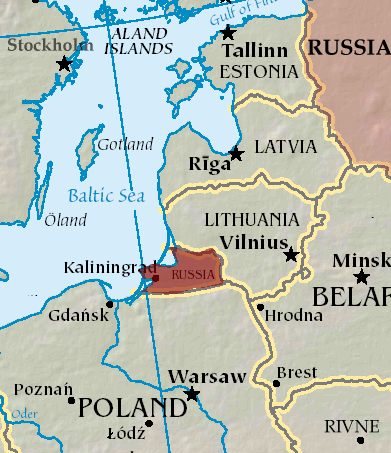 Kaliningrad Oblast location (Photo: Menchi at Wikipedia)"This applies to metallurgists, the energy sector, and trade in the products of the defense industry complex," Medvedev said in a meeting with vice ministers.

Such plans have been discussed for some time but the recent US sanctions brought the idea back to the attention of officials. It has been turned into a bill that should be  adopted soon.

One of the locations would be the Oktyabrsky Island that covers 10-square kilometers and lies in the Pregolya River in Kaliningrad Oblast, a Russian exclave on the Baltic Coast between Lithuania and Poland.

The other location considered is an undetermined Russian Far East Island.

After the sanctions were announced on April 6, targeted businessmen such as Oleg Deripaska have lost more than US$ 12 billion, the Ruble has taken a heavy hit, as did the Russian stock market.

Officials say that the jurisdictions will allow people to return money to Russia easily and without taxes. Foreign structures, including offshore entities, will be able to be transferred to Russia and retain their legal form.

A representative of the Ministry of Economic Development confirmed that companies will be able to transfer capital to Russia without paying taxes on foreign income. Residents of the jurisdictions can obtain the status of an international business company.

This status allows a company to register in one day and without having to disclose certain types of information such as who is in management. Shareholder agreements and transactions will fall under flexible rules.

Residents of the zones will only be taxed on income received in Russia and officials also discussed exceptions for labor law, currency, corporate and tax rules, and rules for educational, medical and IT companies.