Arms trafficking, organized crime and smuggling millions in cash – the U.S. Treasury Department painted a grim picture of Russian government and business when they explained the latest sanctions during an announcement on Friday, NPR reported. 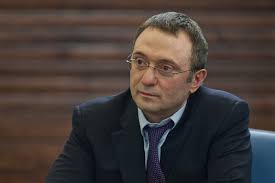 Suleiman Kerimov (Photo: Hlebushek, CC BY-SA 4.0)The press release designates “seven Russian oligarchs and 12 companies they own or control, 17 senior Russian government officials, and a state-owned Russian weapons trading company and its subsidiary, a Russian bank” as corrupt entities that destabilize politics and economics in favor of the oligarchs and select members of the government.

"The Russian government engages in a range of malign activity around the globe, including continuing to occupy Crimea and instigate violence in eastern Ukraine, supplying the Assad regime with material and weaponry as they bomb their own civilians, attempting to subvert Western democracies, and malicious cyber activities," Mnuchin said. "Russian oligarchs and elites who profit from this corrupt system will no longer be insulated from the consequences of their government's destabilizing activities."

All assets under U.S. jurisdiction are frozen and U.S. persons will be prohibited to deal with the designated people and businesses. Even non-U.S. persons can face sanctions for making transactions for or on the behalf of any person or entity on the list.

A familiar name is that of Oleg Deripaska, who was offered personal briefings by former Trump Campaign chairman Paul Manafort. Manafort has been indicted by Robert Mueller for money laundering, conspiracy against the U.S. and fraud.

According to the Treasury Department, "there are also allegations that Deripaska bribed a government official, ordered the murder of a businessman, and had links to a Russian organized crime group."

Suleiman Kerimov is another one of the designated oligarchs. A gold baron and Russian Federation Council member, Kerimov is also an alleged money launderer and has been detained in France for transporting hundreds of millions of euros into France through transfers but also by bringing 20 million in cash in suitcases. Kerimov has been accused of avoiding 400 million euros in taxes for the villas he bought to launder money.

Andrei Skoch is a deputy of the Duma, the lower house in Russia’s Federal assembly. The Treasury Department press release states that Skoch used to lead a Russian organized crime group and still has ties to the crime world. Skoch is also a billionaire steelmaker.

Putin’s son-in-law Kirill Shamalov is the co-owner of a company that came up in the Paradise Papers and had its natural gas transported by a shipping company owned by U.S. Commerce Secretary Wilbur Ross.

For more information on the list of persons, take a look at the designations page on the Treasury website.