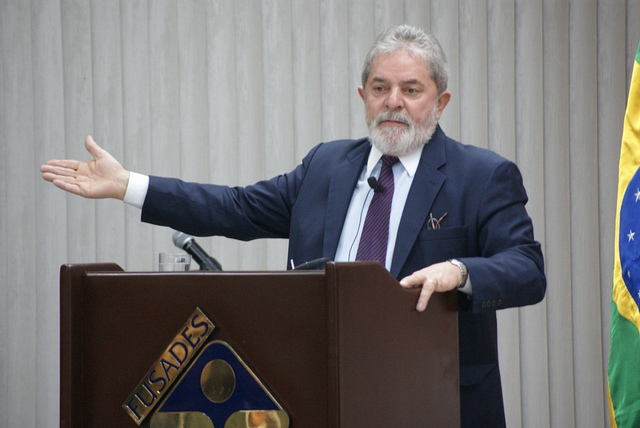 Former President Luiz Ignacio Lula da Silva (Source: Alexandar Bonilla, CC BY 2.0)Lula was convicted in 2017 of corruption for receiving roughly US$755,000 in bribes from construction company “OAS” in an apartment swap, where a simple flat bought by Lula was traded for a seaside apartment in the same building. Last week, a court upheld the conviction.

On Thursday, the Supreme Court denied Lula’s request to remain free while exhausting the appeal process.

The decision is based on a precedent set in a lower court in 2016, which ruled that those convicted in criminal cases can begin serving their sentence after the rejection of the first appeal.

Lula and his party, Partido do Trabalhadores (PT), are appealing on the basis that Lula’s ownership of the apartment was never proven, and that the court’s decision was based solely on the testimony of the former CEO of OAS, who was himself convicted of corruption.

Ousted president Dilma Rousseff has spoken candidly about the assumed political motivations of Lula’s conviction: to prevent his candidacy in the upcoming presidential elections.

“There is no justice in this decision,” the PT said in a statement on Thursday, “there is a combination of political and economic interests, against the country and its sovereignty, against the democratic process, against the Brazilian people.”

Protests broke out across Brazil on Wednesday, both in support of the court’s decision and against what some view as a coup and an affront to democracy, according to the BBC. Despite the conviction and series of scandals, Lula continues to enjoy widespread electoral support.

An arrest warrant is expected in the next three days, after which Lula will be detained while his lawyers prepare appeals for the two courts left that they can turn to for re-examination of legal procedures during the case. These courts have the power to annul Lula’s conviction while another court --the Superior Electoral Court-- will decide if he is allowed to run for president again.