Russia: The Network behind the Illegal Chapel Construction

Two Russian environmental activists were beaten up when they returned from taking photographs of a private chapel illegally built on forest land on the Black Sea Coast. A gang of thugs was waiting for them at their offices in Krasnodar, Russia’s Novaya Gazeta revealed on Monday. 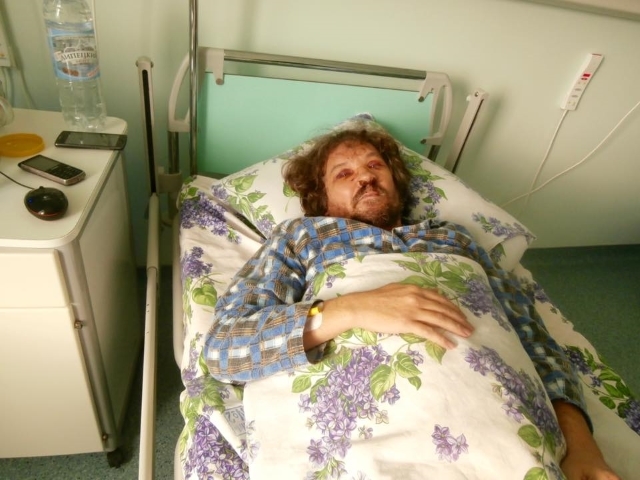 Andrei Rudomakh in the hospital (Photo Credit: Novaya Gazeta)At the end of December, Andrei Rudomakh, head of the North Caucasus Environmental Watch, and his colleague Viktor Chirikov had gone to the village of Krinitsa in the Gelendzhik region after hearing that parts of the nature conservation zone nearby were being deforested.

The two activists saw that trees had to make way for a luxurious private chapel and that foundations had been laid to build a residence on a plot of land, which by law can only be used for tourism purposes. The new palace was going to be surrounded by vineyards.

As they stepped out of their car upon returning to the office, three masked men pepper sprayed them, beat them with brass knuckles and stole their documents, cameras and computers.

Rudomakh’s nose was broken and he suffered severe head injuries. Chirikov was struck in the stomach, Arina Lisovets, a member of the watch group, told Kavkazr.

The December attack was not the first against their activist group. According to Meduza, this one followed two previous attacks linked to other cases of environmental violations.

The Novaya Gazeta investigation showed that the plot is leased by a company run by  Alexei Toth, a lawyer from St. Petersburg who also runs three other companies, owned by another lawyer—Nikolai Egorov.

Egorov often defends the interests of Russia in international cases.

Novaya Gazeta obtained the state customs declaration and other documents showing that the prefabricated chapel was imported from Greece by the wife of Oleg Kusnetzov—the former head of the military unit of the Russian Federal Protective Service, FSO.

Kusnetzov was involved in the construction of the controversial "Putin's palace" in Praskoveevka on Cape Idokopas.