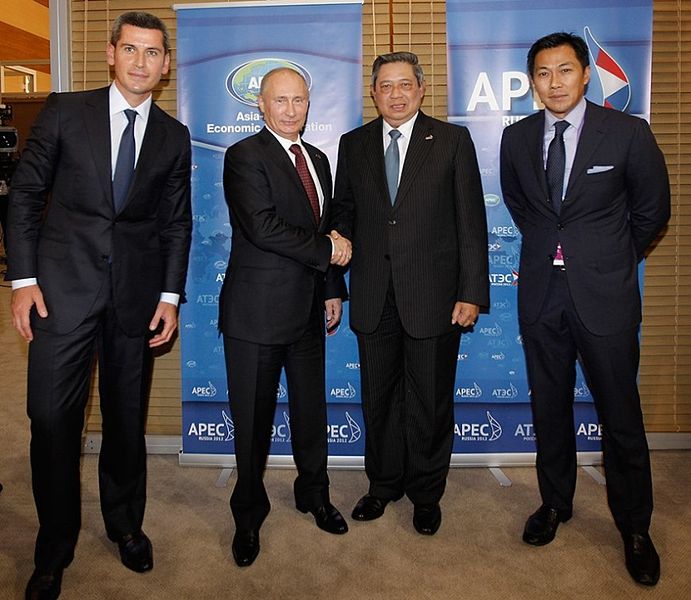 Ziyavudin Magomedov on the far right next to Vladimir Putin at the 2012 APEC CEO Summit (Source: ABAC Indonesia, CC BY 4.0)The 49 year-old is one of Russia’s richest business tycoons and is considered an oligarch of Putin by the U.S. Treasury Department.

A prosecutor told the court at a hearing that the case involves seven instances "of embezzling from federal and regional budgets and from state-run companies.”

The details of the investigation are unclear and some have questioned whether the arrest was politically motivated by business rivals closer to the Kremlin, or if the charges stem from the troubled projects Magomedov managed.

Magomedov made his fortune in construction, foreign tech ventures, and transport logistics through his company Summa Group, which constructed a FIFA World Cup venue in Kaliningrad ahead of the 2018 games. He has investments in the ride-share company Uber, a diamond venture, a Russian state-owned oil monopoly, and the Virgin One Hyperloop project in the United States.

The presiding judge in the case ruled that Ziyavudin Magomedov, his older brother, Magomed Magomedov, and another Summa Group associate be held until May 30th and rejected a bail offer of $44million citing the younger Magomedov as a flight risk due to his private aircraft and ubiquitous financial assets. The day before his arrest, Magomedov booked a flight from Moscow to Miami—a trip he claims is for a medical procedure.

The Financial Times reports the possibility of the arrest being linked to the potential swap of Prime Minister Dmitry Medvedev—a close associate and partner of the Magomedov brothers-- following the Russian elections.

“They’re going after the Medvedev wallet. It’s a political game,” a source said to the Financial Times.

Magomedov has denied the allegations.