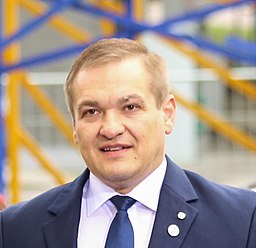 Interior Minister Eimutis Misiunas (Photo: Arno Mikkor CC BY 2.0)Other officials said that there is evidence that are right to reside in Lithuania – and freely travel across the Schengen Area – could be obtained this way for fees up to €10,000 (US$ 12,390).

The Lithuanian parliament organized a hearing behind closed doors on the matter shortly after the OCCRP and Transparency International published their collaborative stories about Golden Visa mechanisms in various European countries. Misiunas provided members of the parliamentary Committee on National Security and Defense classified information on what he called the ‘grey’ migration.

After the hearing, Misiunas admitted some officials from the Lithuanian migration apparatus were involved in helping non-EU citizens obtain their residency under false claims. “Some people, as far as I am aware, have left the system a long time ago. As for the others – I don’t know,” Misiunas told the BNS news agency on Wednesday.

According to the Minister, there is no proof public officials were rewarded for their assistance. However, there was at least one case in 2012, when authorities detained seven officers in the Migration Department who were suspected of having been involved in selling residential permits.

On the other hand, Vytautas Bakas, the head of the parliamentary Committee on National Security and Defense, expressed in a Facebook post his concern that issuing residential permits based on false data was a booming business.

“We have data that show the price for facilitating the issuing of a residential permit can go up to €10,000. There is a separate pricing for extending a permit or establishing a “business”. (…) Such intermediaries can be exploited by people who, after getting into Europe, can pose threats to security“, Bakas wrote.

He also added that some of the intermediaries could be “of interest” to foreign intelligence.

The OCCRP Lithuanian Golden Visa story shows that the small Baltic state is experiencing a huge rise in demand for residential permits. Ukraine and Russia are the two countries with the highest number of wanna-be Lithuanian residents.

Since 2013, the country has denied or annulled residential permits for a total of 100 people suspected in posing threat to national or public security. Among those who lost their status in Lithuania in 2017, are two affiliates of Vladimir Putin’s inner circle.

Anton Treushnikov, an affiliate to the Rotenberg brothers, is considered to be among the closest people to the Russian president. The second one is Yury Artyakov, brother of Vladimir Artyakov, the deputy director of Rostec, the state-owned military and industrial holding company.

Public officials wouldn’t say if national security was the reason why Lithuania decided to keep Artyakov and Treushnikov out of the country.