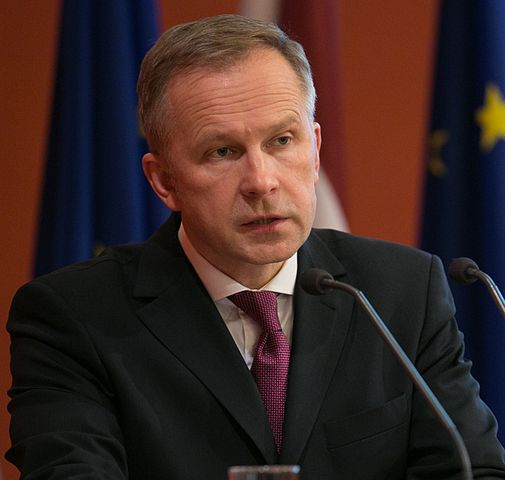 Ilmars Rimsevics (Ernests Dinka, Saeimas Kanceleja, CC BY-SA 2.0)“The Corruption Prevention and Combating Bureau, KNAB, has applied the status of being detained to the Governor of Bank of Latvia,” a statement from the cabinet of Maris Kucinskis said.

No further details were given but local media linked the arrest to the allegations made by Russian-born and UK-based banker Grigory Guselnikov who is the majority shareholder of "Norvik bank" since 2014.

Last December Norvik bank requested an international arbitration “as a result of unfair, arbitrary, improperly motivated and unreasonable regulatory treatment accorded to the Bank by the Latvian authorities, contrary to Latvia's obligations under international law,” the bank said in a statement.

Although the bank said that details about the dispute remain confidential, the Latvian TV investigative news program "Nothing personal" has alleged that a senior Latvian official in the banking sector has asked the bank to pay bribes or face sanctions from Latvia’s banking regulator the official allegedly had influence over.

Latvian TV also claimed that insolvency administrator Maris Spruds is involved in the bribing efforts as well. Spruds was arrested last June and charged with extortion and money laundering. He was released on Friday on record bail of € 500,000 (US$ 620,000).

"Norvik bank" was fined 1.3 million euro in July 2017 for incomplete due diligence and monitoring of the non-resident banking transactions which resulted in the circumvention of the international sanctions against North Korea.

Rimsevics, who has been head of CB since 2001 and is member of the European Central Bank’s Governing Council, was questioned by anti-corruption agents for some eight hours while his home and his office were searched by investigators.

Latvia's Minister of Finance, Dana Reizniece, called on Rimsevics to step down, at least during the investigation.

The scandal comes only days after the US. Treasury Department’s Financial Crimes Enforcement Network, FinCEN, proposed sanctions against ABLV, Latvia’s third largest bank, for laundering billions in illicit funds and allowing its clients to violate sanctions on North Korea.

"We have asked the United States to provide information to our prosecutors and anti-corruption office, so they can take precise and fast actions," Reizniece said.

The Latvian government will be having an urgent meeting on Monday dedicated to the troubles in the banking sector. The parliament's National Security Committee has also called an emergency meeting.