Germany: Airbus To Pay US$ 99 million For Unexplained Payments

Prosecutors in Munich closed out the German branch of a multinational probe into corruption at Airbus, ordering the company to pay a settlement of around US$ 99 million, Deutsche Welle reported Friday. 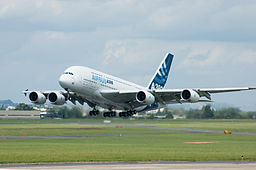 An Airbus A380 (Photo: Dmitry A. Mottl, CC)Although the investigation revolved around allegations that Airbus paid bribes to win a $2 billion contract for supplying fighter jets to Austria, evidence actually pointed to hundreds of million of dollars of unaccountable payments elsewhere.

Britain, France and the United States are still performing their own investigations into allegations that Airbus bribed officials to win contracts in the past, according to The Economist.

The aerospace industry is a competitive one. Defense contracts with national governments are enormous cash cows for companies like Airbus and their main competitor, Boeing. Sales teams from both companies constantly work to edge one another out, securing deals to sell their older surplus inventory or newer, multi-billion dollar jets.

As a result, allegations of bribery are not uncommon in the industry. In 2006 Boeing was fined $615 million for using corrupt practices to win military contracts from the Pentagon.

Airbus has also had problems with corruption unrelated to the Eurofighter contract in 2003. That year, an internal of supplier payments at Airbus exposed lies about bribes given on behalf Airbus by third-party consultants, which the company reported to Britain’s Serious Fraud Office and France’s equivalent, according to The Economist.

That same year Airbus said it may have violated American rules on arms exports because of other “fees” they paid to increase their chances of securing sales.

In 2016 Chief Executive Tom Enders closed Airbus’ sales unit in Paris, calling it the “bullshit castle”, according to The Economist. The French group had hired certain external sales consultants who were known for making bribe-like payments, and had got Airbus into trouble before.

The $99 million dollar settlement Airbus was ordered to pay on Friday is the result of still further allegations of corruption, which have been verified by the German government’s investigative probe. Airbus failed to account for over $122 million in payments made to the shell companies Vector Aerospace and City Chamber, according to The Financial Times.

Airbus said that it had agreed to pay the penalty for failing in its supervisory duties when these unexplained payments were made. The payment will end the German investigation, but the Austrian version is still ongoing.