Esmond Bradley Martin, an American conservationist who spent his life’s work undercover, exposing the illegal ivory trade across the world, was found stabbed to death in his Nairobi home on Sunday. 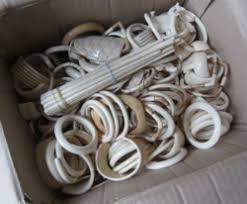 A box of confiscated ivory in Togo (Photo: US Department of State)According to the Associated Press, police in Kenya say Martin appears to have been the victim of an armed robbery, but an investigation is continuing.

Martin spent time creating meticulous maps of a trade that has decimated large populations of rhinos and elephants. Organized crime groups in China, Vietnam, South Korea and Thailand have long been involved in the ivory trafficking and Martin frequently posed as an ivory dealer himself to get information about pricing, supply and demand patterns.

According to Paula Kahumbu, a Kenyan elephant expert with National Geographic, the evidence Martin collected about the Chinese ivory trade factored into Beijing's decision last year to shut down the legal ivory market.

As China has clamped down on illegal ivory, the trade has shifted to neighboring countries including Laos, Vietnam, Cambodia and Myanmar.

With his colleague Lucy Vigne, Martin risked his life last year by staying at a Chinese casino in Laos that was inhabited by gangsters and traffickers in order to visit the illegal markets. The two later reported that the world’s fastest growing ivory trade market is emerging in Laos, reports the BBC.

At the time of his death, Martin was working on a report about ivory trafficking in Myanmar.

Although Martin’s work among ivory traffickers put him at great personal risk, there was no immediate suggestion that the stabbing was linked to his work, The Washington Post reported Monday.

The Los Angeles Times, however, drew a comparison to the death of conservationist Wayne Lotter, who was killed in Tanzania. Apparently, Lotter faced a constant stream of death threats related to his work tracking down poachers, but police declared that the circumstances of his death pointed to an armed robbery.