Italian police arrested on Thursday 23 people suspected of having links to the Cosa Nostra, including a gambling entrepreneur believed to have partnered with the Sicilian mafia to expand his business empire. 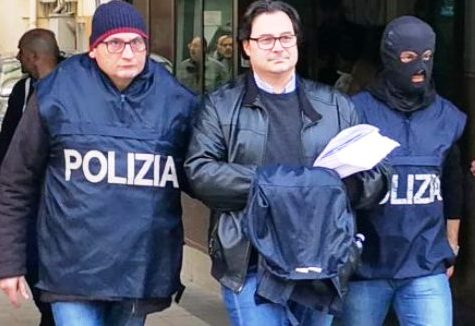 Benedetto Bacchi was arrested Thursday (Photo: Police Handout)Operation “Game Over” was designed to crack down on a powerful clan in Palermo whose members were charged with various counts of mafia-type association, money laundering, fraud and drug trafficking.

The shops were not authorized by Italian gambling regulators and existed in a legal grey area, taking advantage of EU regulations which allow license-holders in any member state to operate across the continent.

Police said in just a few months after launching his business, Bacchi was able to generate a monthly profit of more than one million euro. Authorities believe such sums he could have made only thanks to links with the Cosa Nostra.

“It is evident that such results would have never been achieved without the crucial intervention of the mafia association which forced betting agencies operating in its heartlands to market Bacchi’s gambling platforms,” a police statement said.

The statement also explained that in exchange for this kind of “promotion,” Bacchi would “transfer in the coffers of the Cosa Nostra between 300,000 and 800,000 euros every year.”

The system made so much money - investigators said - that in a short time Bacchi started looking at new business opportunities to reinvest the gambling proceeds. He acquired a construction company and bought the villa of a former Palermo Football Club player for 500,000 euros. Bacchi also reportedly considered taking over a local news publication, Live Sicilia.

Through a businessman close to Bacchi, the Cosa Nostra also allegedly set up a profitable food export to the United States.

“I’ll give you these tomatoes for 17.50 euros and you have to flood New York with them,” the alleged boss, Francesco Nania, was recorded saying in a wiretapped conversation.

“The mafia changes its skin and, in this case, it makes deals with businessmen capable of securing them big profits,” said the head of the Palermo police, Rodolfo Ruperti, chief officer of Palermo Police.