Tens of thousands protested in Tirana over the weekend against the government, accusing it of links to organized crime and corruption, according to the Associated Press. 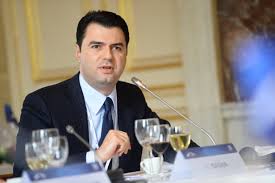 Lulzim Basha was one of the speakers at Saturday's protest (Photo: DERIBAUCOURT, CC-BY-2.0)Toting portraits of Prime Minister Edi Rama and his former interior minister Saimir Tahiri, the crowd shouted "Rama go" and "No to narco-state." The protesters waved Albanian, US and EU flags.

Local journalists reported that more than 10,000 people turned out for the rally, while protest organizers told Deutsche Welle that the turnout reached 300,000. The bulk of the crowd represented supporters of the opposition: the centre-right Democratic Party and its ally, the left-wing Socialist Movement for Integration.

Rama responded to the protests, claiming his opponents hoped to sabotage EU accession talks by fostering a sense of crisis.

Saimir Tahiri is currently under investigation on corruption and drug trafficking charges, and opposition leaders have accused Rama and his cabinet of cushioning their private bank accounts while the average Albanian wage stagnates below US$ 500 per month.

The parties allege the government has colluded with cannabis traffickers, allowing Albania to become the "Colombia of Europe.”

Both parties held a protest in the parliament that turned violent last December, claiming that Rama's Socialist Party was violating the constitution by electing a temporary General Prosecutor in the last session of the year, according to Balkan Insight.

However, although hundreds of riot police and two water cannon trucks were deployed close to Rama's office building, the protests on Saturday ended peacefully amid speeches from opposition politicians.

Democratic leader Lulzim Basha called for "an anti-Mafia government that will fight organized crime, take the justice reform ahead in line with the constitution and prepare the holding of free and fair elections."

The Interior Ministry—in an unprecedented move—thanked the opposition protesters for remaining calm and the organizers of Saturday's event for their "cooperation in support of police work,” according to The New York Times.

Albania was granted EU candidate status in 2014 and aims to begin negotiations with Brussels this year.