Corruption has left the only route connecting Kabul with Afghanistan’s northern provinces decrepit, undermining million-dollar repaving efforts and billions of dollars in foreign donations for road improvements, The Washington Post reported on Monday. 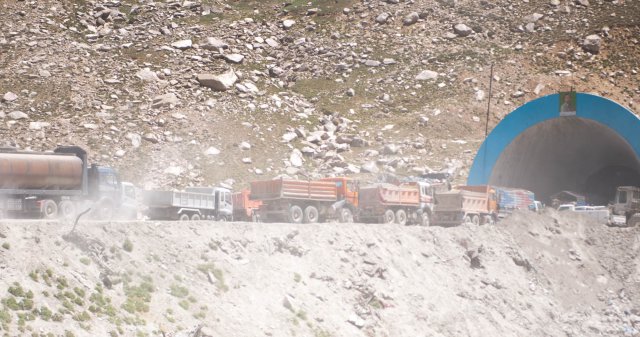 Salang Pass hasn't been sustainably paved in decades (Photo: US Army, Public License)Today, it is virtually impossible to safely traverse Salang Pass—a treacherous but economically vital piece of infrastructure— as a result of both natural hazards and negligent construction. More than 100 people die on the road to the tunnel at the top of Salang Pass each year. There are no guardrails and repairs have only been attempted once.

The tunnel is filled with dust and debris, having been built to withstand a traffic load of only one to two thousand vehicles, despite the fact that as many as 10,000 vehicles currently attempt to cross it daily. The road through the tunnel, once paved, is now simply dirt because of a lack of maintenance, the paper reports.

Gen. Mohammad Rajab, a Defense Ministry official who oversees the road’s security, described past incidents when fires had broken out in the tunnel, sucking oxygen out of the structure and asphyxiating drivers.

The sole repair attempt on the Salang Pass infrastructure was funded by the World Bank in 2004. An anonymous World Bank representative who spoke to The Washington Post said that contracted companies siphoned money from the budget and hired sub-contractors who used cheap material that could not withstand cold temperatures and frequent traffic. The Ministry of Public Works granted contracts that were often sub-contracted multiples times to pavers who took private cuts of public funds, according to Deputy Minister Abdul Rahman Salahi.

“If you ask any Afghan, they will tell you that road-building is one of the most profitable [ventures] in the country for corrupt people,” Suroush told the paper.

“We are aware of our shortcomings and we are ensuring far greater oversight in this new round of contracting,” he said.

The World Bank hopes that the road through Salang Pass is properly paved by 2022.