A Thai tattoo worshipper’s Facebook photo of the torso of a fully inked old man playing boardgames with other retirees on the side of the road led to the arrest of a former Yakuza boss on Wednesday. 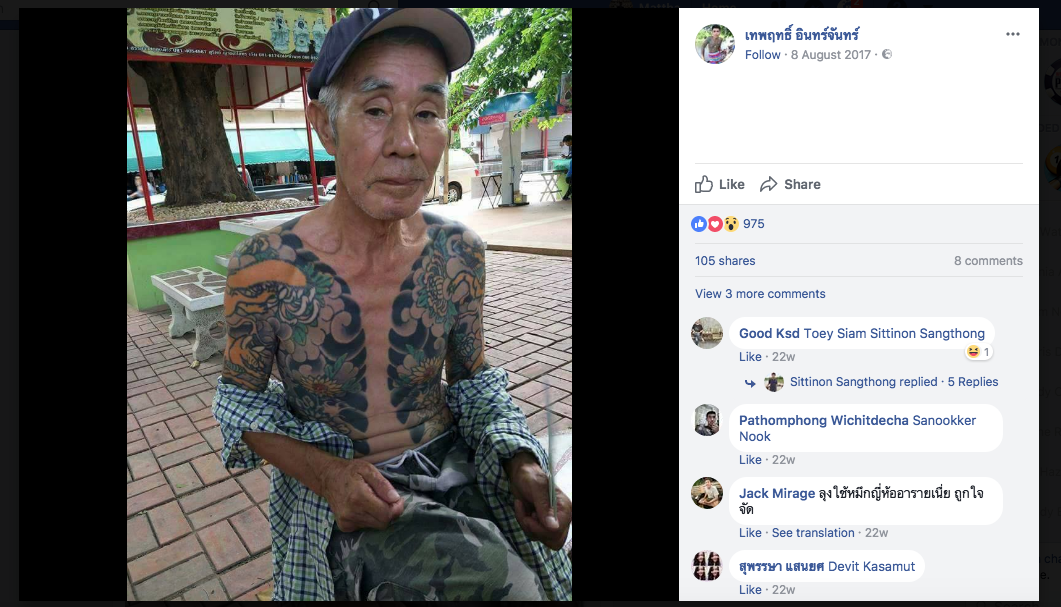 The photo went viral and Japanese authorities recognized 74 year-old Yakuza boss Shigeharu Shirai by his tattoos and his missing little finger, a common self-inflicted punishment among the Yakuza.

They notified Thai authorities who then arrested Shirai in Lop Buri, Muang district, north of Bangkok. He will be extradited to Japan from where he fled in 2005 after being accused of murdering a member of a rival Yakuza syndicate along with seven others, reports the Bangkok Post.

The Yakuza is a transnational organized crime group that has been present in Japanese society since the 17th century, engaging in illicit activities for generating capital such as prostitution, drug trafficking, cyber-hacking, and gambling. The Yakuza are not illegal in Japan, despite their illegal activities. The syndicates offer aid and supplies during earthquakes, invest generously in legitimate mainstream companies, and are against theft.

Tattoos are part of a long tradition in Japan but certain motifs and their placements are associated with the Yakuza. They often communicate membership in different syndicates.

The local who took the photo is himself heavily tattooed and posted Shirai’s photo because he was fascinated by the old man’s elaborate torso tattoos, depicting intricate designs characteristic of the Yakuza, reports the BBC.

Japanese authorities already knew Shirai was hiding in Thailand where he is married to a local woman but the photos helped in determining his location.

Shirai is believed by the authorities to be the leader of the largest Yakuza syndicate, the Yamaguchi-gumi.