Jacob Zuma, the outgoing South African President, established a long-awaited commission of inquiry on Tuesday to investigate allegations of private interests having steered his government’s policy. 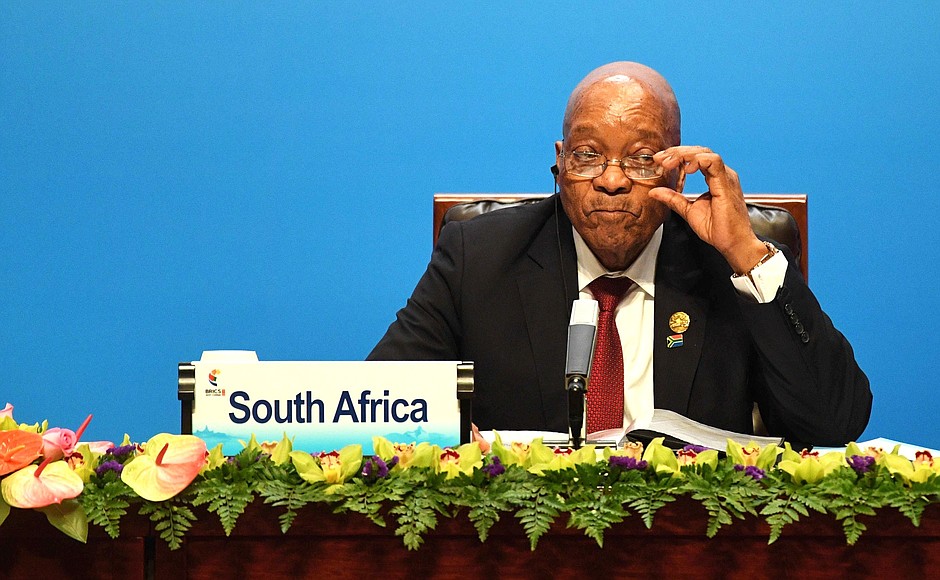 Jacob Zuma, BRICS Business Council meeting (Photo Kremlin, Public Domain)The announcement followed sustained public pressure on Zuma which culminated with the North Gauteng High Court, a regional court, ordering Zuma to appoint a commission of inquiry within 30 days of their ruling on 14 December 2017, headed by a judge selected by the Chief Justice.

“This matter cannot wait any longer,” Zuma said in a televised address to the nation. “It is of such serious public concern that any further delay will make the public doubt government’s determination to dismantle all forms of corruption and entrench the public perception that the state has been captured by private interests for nefarious and self enrichment purposes.”

A scandal erupted after documents leaked to the South African press last year revealed the close ties between his family and the secretive, well-connected Gupta’s, who many of the allegations revolve around. Several of Zuma’s children served as directors of companies owned by the Gupta’s.

The Guptas relocated to South Africa from India in 1993 and have allegedly used their vast wealth to wield influence over the government. It is suspected that kickbacks amounting to US$ 411 million were paid in exchange for state contracts.

In partnership with Nedbank, one of South Africa’s largest banks, companies controlled by or connected to the Gupta family extracted more than 1 billion rand (US$ 67.2 million) from Transnet, a state-owned company charged with constructing rail, port, and other transportation infrastructure, the OCCRP reported in November following a massive data leak now available to journalists worldwide.

The documents include a contract between China South Rail and Salim Essa, an alleged front man and proxy for the Gupta family, where the locomotive manufacturer promises to pay Essa a $321 million advisory fee as part of the deal that brought the Chinese trains to South Africa.

The Pretoria court also ordered that Zuma, whose presidency is approaching the end of its two-term limit, personally pays the costs of the review, which the President has appealed. Zuma argued that he is concerned that this sets a particular precedent for the office of President and is deserving of legal certainty.

“There should be no area of corruption and culprit that should be spared the extent of this commission of inquiry,” he continued, before adding that he expects everyone to cooperate with the inquiry.”

The inquiry into state capture - when private interests are able to dictate parts of government policy in accordance with their interests - will be directed by Deputy Chief Justice Raymond Zondo after his recommendation from Chief Justice Mogoeng Mogoeng.

A previous investigation into the issue of state capture was not completed due to a lack of resources but former public protector Thuli Madonsela said she was encouraged by Zuma’s reference to it.

“I am also mindful of the concerns raised by the public protector in her report, wherein she lamented the lack of resources to conduct a wider inquiry into this matter,” said Zuma.

“Accordingly, by making more resources available, it is my sincere hope that the commission will be able to reach many of those areas of concern that may not have been reached by the public protector’s investigation, but form part of what she might have investigated, had she had sufficient resources to do so.”

Nonetheless, Madonsela said the commission of inquiry may only focus on state capture allegedly committed by the Zuma and Gupta families.

“I welcome the president’s announcement” said Madonsela. “It is two years too late, if you look at when the first whistle-blowing happened, and more than a year after I had asked him to establish a commission. But better late than never.”

She added that although evidence may have been compromised, the situation “can still be salvaged”.

The ANC's elective conference in Johannesburg last month ruled the inquiry should be expedited. However, Zuma appealed two days after the conference. Now, however, he has been forced into offering it his full support.