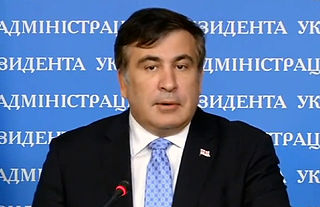 Mikheil Saakashvili 17 February 2015 (Photo: Inter, CC BY 3.0)Saakashvili served as Georgian president from 2004 to 2013. After stepping down, he supported the revolution in neighboring Ukraine and in return was awarded by the new president Petro O. Poroshenko citizenship and even the post of governor of the Odessa Black Sea region.

During his presidency in Georgia, Saakashvili’s administration was criticized internationally for the handling of the 2006 murder of banker Sandro Girgvliani by then high-ranking Ministry officers.

The Public Prosecutor claims that Saakashvili assured then head of the Interior Ministry of Constitutional Security, Data Akhalaia, that he would pardon the accused officials, and not reveal those responsible for ordering and committing the murder.

The Tbilisi City court sought extradition while trying Saakashvili in absentia for abuse of presidential powers, covering up evidence, and pardoning the four men convicted of killing Girgvliani. The court determined that Saakashvili issued the pardons in 2008 without utilizing the presidential commission. In addition to his prison sentence, the court issued a 1.5-year ban from holding public office.

“The ‘verdict’ of the Georgian court ... against me is completely illegal and contradicts all international, national norms and common sense,” Saakashvili posted on his Facebook page following the verdict.

He is also facing criminal charges in Ukraine, for allegedly assisting a criminal organization. The Ukrainian courts recently stripped Saakashvili of citizenship for misrepresenting information on official forms.

Saakashvili claims the legal action against him in Ukraine and his home country of Georgia are part of an effort to discredit him, led by corrupt political elites in both countries.

Ukraine said it would consider the extradition request, going through the required legal channels to do so, including questioning.