A large wave of protests against the stagnating economy and persistent corruption in Iran prompted clashes between citizens and security forces that have taken 21 lives over the past week. 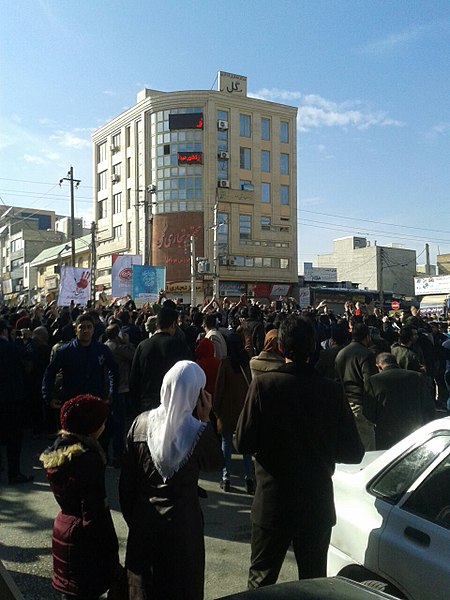 Protestors in Kermanshah, Iran (Photo: VOA, Public Domain)Tens of thousands are demanding reforms but some officials have responded by dismissing their demands and accusing the United States of inciting the protests to overthrow the government, the BBC reported.

Protesters initially cited frustration with graft within the government, Iran’s costly involvement in foreign conflicts, unemployment and the rising prices of basic necessities as reasons for reform. Demands meanwhile include more radical petitions including the overthrow of Supreme Leader Ayatollah Khamenei, according to The Washington Post.

Iranians took to the streets on December 28 in the largest demonstrations that gripped the country since 2009 when millions protested the re-election of former president, Mahmoud Ahmadinejad.

Current protests are taking place in rural areas, whereas in 2009 demonstrations had been concentrated in the capital, with crowds predominantly made up of the educated elite and urban middle class, reports The Washington Post.

According to The Guardian more working class protesters are expressing their frustration with the political establishment this time around, and protests are of a more impromptu nature than in 2009 when security forces were able to identify specific leaders of what was eventually dubbed “The Green Movement” or the “Persian Spring”.

Now, young citizens are finding common cause and common grievance across the country, even in traditionally conservative rural areas, less prone to exhibitions of political disobedience. This has happened largely spontaneously, even as the Iranian government has been restricting access to social media and, in some cases, shutting off the Internet, The New York Times reports.

In an interview with the The Associated Press Nasrollah Mohammadi, a mechanic near Tehran’s Enghelab Square, expressed his solidarity with the protesters. “They are right. Corruption is high and opportunities are given to their own friends,” Mohammadi said, referring to government officials. “I have two sons, 27 and 30, at home without jobs years after graduation.”

Transparency International's 2016 Corruption Perception Index ranks the Iran 131st out of 176 countries. Ayatollah Khamenei, Iran’s unelected Supreme leader, controls billions of dollars of assets and maintains a massive amount of power in the country, while many people struggle to make ends meet.

Unemployment hovered at 12.4% this fiscal year, according to the Statistical Centre of Iran, and youth unemployment reached 24.4%. The price of eggs recently increased 40%.

The Iranian government has claimed it supports the right of citizens to protest peacefully but Supreme Leader Khamenei says that enemies of the state have been inciting Iranians to engage in illegal activities.

The Iranian ambassador to the UN, Gholamali Khoshroo, sent on Wednesday a letter to Antonio Guterres, the UN secretary-general, accusing the US of "inciting Iranians to engage in disruptive acts," according to Al Jazeera.

On Wednesday, tens of thousands of people marched in a counter-demonstrations organized by the Iranian government itself. In many cases, public employees were required to participate. The marches were broadcast by Iranian state media, according to The Washington Post.

Authorities arrested 450 anti-government protesters in a three-day span in Tehran and according to official figures, 90 percent of those arrested were under 25 years old, reports Reuters.

Protesters could potentially face the death penalty when their cases come to trial, according to the head of Tehran's Revolutionary Court, the AP reports.