She was called the “Mistress”. 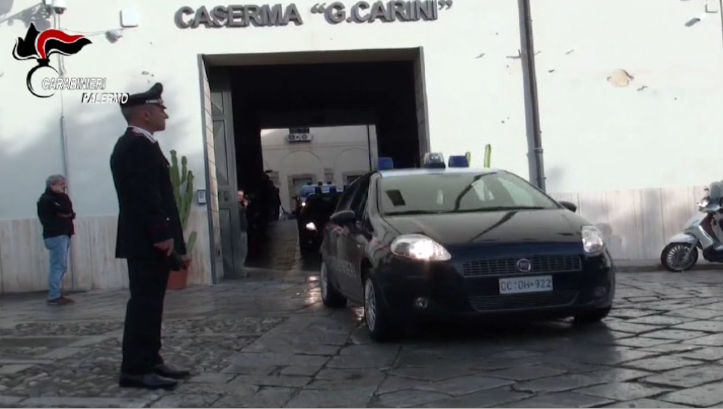 Image from the Arrest Operation (Photo: Carabinieri Public Video)Maria Angela di Trapani, the wife of a Cosa Nostra boss and daughter of another, is among the 25 people arrested Monday morning during a police operation in Sicilian capital of Palermo.

Operation Talea, led by Palermo’s Chief Prosecutor Francesco Lo Voi and his colleague Salvatore De Luca, was carried out by 200 Carabinieri and dismantled two of the city’s crime gangs: Resuttana and San Lorenzo, historically close to the Boss of the Boss Toto Riina, who recently passed away.

The two “mandamento” used to be one but Riina split them in two in order to get two votes when the Cosa Nostra was electing the boss of the bosses, Colonel Antonio Di Stasio from the Carabinieri of Palermo explained.

But there were times when Maria Angela di Trapani - daughter of boss Francesco 'Ciccio' di Trapani and wife of Salvino Madonia, the son of another historical boss Francesco Madonìa - was heading both gangs, investigators found.

“The Mistress,” served prison time between 2008 and 2015 for delivering orders from her jailed husband and his two brothers.

One of those orders was the murder of another boss who had spread the word that Maria Angela's just born son could not be her husband’s because he was in jail.

“When she got out of jail she had a pedigree,” di Stasio said.

“Spending time in jail is very important for a Cosa Nostra career,” although being the daughter and the wife of two important Palermo bosses, she did not really need that in her CV, he said.

But with all of her qualifications and her personality, she became the one who had the last word in the mandamento, as soon as she was released.

She hired and fired mandamento bosses and led at least 22 of their extortion businesses.

How did this work?

One of the bosses would visit a construction site and tell the owner of the company that one of his workers could fall from the building if he doesn’t pay a certain sum. Most of the entrepreneurs pay but two reported the blackmail to authorities.

During the investigation, inspectors were delighted to hear from the wiretapped conversation that the Cosa Nostra was in crisis.

They would complain that not so many people wanted to be members of the Cosa Nostra and spoke nostalgically of old times when just mentioning the names of old bosses would spread fear,” di Stasio told OCCRP.

But it’s not the first time and the criminal organization always finds a way to reboot and reorganize itself.

Besides, it is confronted But on the other side are brave and professional investigators and prosecutors like Francesco Lo Voi and Salvatore De Luca, concludes Colonel Di Stasio.