The UN Security Council unanimously adopted on Tuesday a resolution calling for a stronger crack down on human trafficking and modern slavery worldwide. 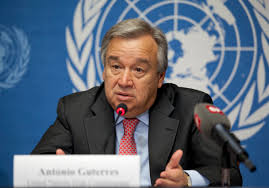 The document particularly condemned the sale of people by the Islamic State in Iraq and the Levant, ISIS, and violations and abuses by Boko Haram, Al Shabaab, the Lord’s Resistance Army and similar groups for the purpose of sexual slavery, sexual exploitation and forced labor.

The resolution is the product of a debate held by the 15-member Security Council on the issue of human trafficking which is believed to raise US$ 150 billion in illegal profits annually.

The Council reaffirmed “its condemnation, in the strongest terms, of all instances of trafficking in persons, especially women and children, who made up the vast majority of all trafficking victims in areas affected by armed conflict.”

The text urges for greater efforts to tackle such activities through anti-trafficking laws and the use of data and technology.

“Slavery and other such egregious abuses of human rights have no place in the twenty first century,” said U.N. Secretary-General Antonio Guterres.

“Their brutality knows no bounds: sexual exploitation, forced labor, the removal of bodily organs and slavery are the tools of their trade,” he added.

It also advocates for ramping up investigations and victim identification mechanisms as well as better support to victims. The resolution also calls for combating crimes linked to human trafficking, such as money-laundering, corruption, the smuggling of migrants and other forms of organized crime.

Nonetheless, while most delegates commended the resolution, many others expressed reservations regarding the increasing development of the normative framework, some fearing that too many frameworks would weaken anti trafficking efforts. Spain’s representative suggested that the UN Organization on Drugs and Crime (UNODC) set in motion a global strategy.

The resolution was passed a few days after a video footage was released by television news channel CNN showing African migrants auctioned off as slaves in Libya.

“It is our collective responsibility to stop these crimes,” Guterres told the Council members, stressing refugees should be treated as victims instead of being detained, prosecuted or punished for unlawful activities they were compelled to engage in to survive.

According to the International Labour Organization (ILO) and rights group Walk Free Foundation about 40 million people globally have been enslaved in 2016, Reuters reported.