A few days after CNN released a video footage showing migrants being auctioned off, the Libyan government launched on Friday a formal investigation into alleged immigrant slave markets, the US television network reported. 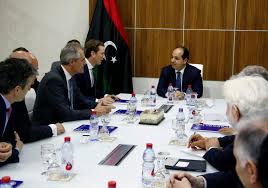 The video footage, published on Wednesday, shed light on live auctions at nine locations across Libya where migrants are sold off to North African buyers as potential farmhands for as little as US$ 400. Many more are believed to take place each month.

Deputy Prime Minister, Ahmed Omar Maiteeq, said in a statement posted on Sunday on the Facebook page of the GNA’s press office, that his Government of National Accord (GNA) will assign “a competent commission to investigate the reports.”

Libya's Anti-Illegal Immigration Agency is to supervise the operation and assess whether all the auctions take place in territories under the control of the GNA in Tripoli.

"A high-level committee has been convened encompassing representatives from all the security apparatus to oversee this investigation," Anes Alazabi, an official with the Anti-Illegal Immigration Agency, told CNN.

"Priorities of the investigation are not only to convict those responsible for these inhumane acts, but also to identify the location of those who have been sold in order to bring them to safety and return them to their countries of origin," she added.

The revelations of the slave auctions sparked strong reactions across the world.

Guinean President Alpha Conde, and chairman of the African Union, on Friday called for an inquiry and prosecutions of what he called a “despicable trade ... from another era.”

Senegal’s government expressed “outrage at the sale of Sub-Saharan African migrants on Libyan soil” that constituted a “blight on the conscience of humanity.”

"Criminal gangs have exploited absence of collective responsibility to obtain resources to fund their criminal and terrorist schemes through human trafficking by mediating to transport migrants to the other side of the Mediterranean, or to recruit them as terrorist mercenaries," Salah Abu-Rgiga, African affairs official of the Foreign Ministry, said in a joint press conference in Tripoli with 14 African ambassadors, according to Chinese news agency Xinhua.

Hundreds of people took to the streets of Paris Saturday to protest against slavery in Libya — with some carrying a sign that said, “Put an end to the slavery and concentration camps in Libya,” according to The New York Times.

Media investigations into modern-day slave markets in Libya were prompted by information revealed by the International Organization for Migration, a United Nations agency. The Guardian and Reuters had already reported on the issue in April and May respectively.

The International Organization for Migration estimates that there are 700,000 to one million migrants in Libya, and more than 2,000 have died at sea this year.

Many African migrants from countries including Guinea, Senegal, Mali, Niger, Nigeria and Gambia try to reach Europe through Libya in search of a better life. They experience a myriad of rights abuses from human traffickers and the Libyan security forces.