A man burst into the Russia's top liberal talk-radio station, Ekho Moskvy, in the center of Moscow on Monday and stabbed a prominent journalist in the throat, rekindling the debate on freedom of press in the country. 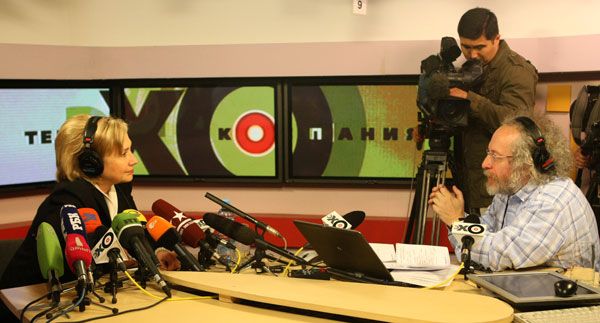 Boris Grits, a 48-year-old with dual Russian and Israeli citizenship, sprayed gas in the face of the building's security guard at lunchtime before jumping over the barrier and walking into the radio station's studios located on the 14th floor. He then grabbed Tatyana Felgenhauer, the deputy editor in chief and program host, and assaulted her with a knife.

The 32-year-old journalist was immediately taken to hospital where she was operated for more than an hour. Alexei Venediktov, the station’s editor-in-chief, said in an interview on Monday evening that she is in an induced coma in hospital and that there is no immediate threat to her life, The Guardian reported.

The attacker was detained at the scene by security guards while waiting for the police to arrive.

According to broadcasting organization Radio Free Europe/Radio Liberty, Moscow police released a video showing the suspect saying that he has been in "psychic contact" with Felgengauer over the past five years and that in recent months it escalated as she had "used telepathic contact" in order to sexually torment him.

Grits has a blog in which he reportedly wrote that the radio host was “following him in his mind” and "experimenting" on him psychically which caused him heart pain. He urged her colleagues to make her stop or “the consequences can be very unpleasant.”

The Uzbekistan-born Felgengaue is a stepdaughter of Russian journalist and military expert Pavel Felgenhauer. She has worked at Ekho Moskvy for 12 years.

Despite being owned by the energy giant Gazprom, Ekho Moskvy (or “Echo of Moscow”) is known for its independent journalism critical of the Kremlin.

The attack sparked debates whether it was politically motivated or done by an unstable person acting alone. Venediktov expressed his doubts about the last assumption.

“He knew things he shouldn’t have known. How did he know Tanya would still be here? By the time of the attack, she would normally have left. There are many questions,” he said according to The Guardian.

Earlier this month, a report on state television channel Russia 24 accused the station and Felgenhauer of working as an "arm of the US State Department" to promote foreign interests in anticipation of presidential election next March. It also said that the foreign NGOs funding Ekho posed a great threat to Russia’s stability just as Islamic State terrorists do.

“We think that these programs stoke hatred towards our colleagues and could have provoked an unstable person into attacking Tanya,” a statement from the Union of Journalists and Media Workers said, according to The Guardian.

Venediktov, who has had whiskey thrown in his face by nationalist activists while speaking at a panel discussion, denounced an increasing violent climate against journalists and opposition politicians, who regularly face attacks and threats, Radio Free Europe/Radio Liberty reported.

Another journalist at Ekho Moskvy had to leave Russia this year after she first received feces in the street and then her car was set on fire.