A top banking executive was sacked for not daring to enforce the bank's anti-money laundering rules against the King of Ghana for whom he deposited £ 350,000 (about US$ 462,000) in cash, media reported on Tuesday. 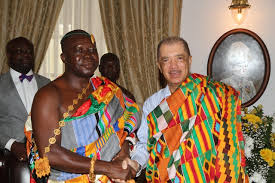 According to the newspaper The Telegraph, Osei Tutu II, the ruler of the Kingdom of Ashanti, had asked the second senior executive of the Ghana International Bank's London office, Mark Arthur, to pick up a bag containing almost £ 200,000 (about US$ 264,000) as well as US$ 200,000 in cash at the ruler’s luxury house located in Henley-on-Thames.

Arthur, who is a dual citizen of the UK and Ghana, took the money without question and deposited it on the Monarch's accounts at the bank’s City office, although the banknotes had consecutive serial numbers. He subsequently agreed to transfer US$ 200,000 to an account at Standard bank in Jersey.

The deposit of such an amount of cash triggered a money laundering alert at the bank's London office, which reported the transactions to the National Crime Agency as suspicious.

The Agency investigated Arthur and the bank fired him for failing to follow anti-money laundering rules and for violating security policies as he was only authorized to transport cash by armored car up to a maximum of £ 250,000 (US$ 250,000). Arthur indeed took an Uber.

The bank official entered into a legal battle with the bank, claiming wrongful and unfair dismissal as well as failure to protect a whistleblower.

He argues that he did not dare conduct the anti-money laundering proceeding against a person of such status. In addition, he contends that similar large cash deposits of obscure provenance had already been made in 2013 and 2014, without the bank investigating them.

He explained at his witness statement that “without wishing to offend a sovereign of my country, I found myself in a very difficult situation and one I had never been in before,” the Daily Mail reported.

Osei Tutu II is one of Africa’s 10th richest monarch and one of Ghana's most influential traditional figures.