US Charges a Hawaiian and a South Korean in Bribery Scheme

US authorities have charged on Tuesday a former US contracting officer and a Korean government official with taking US$ 3 million in bribes for enabling a South Korea-based company win construction contracts worth over US$ 400 million. 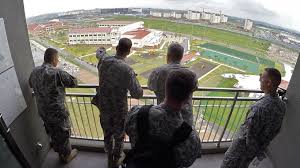 Prosecutors claim that former US Army Corps of Engineers contracting officer, Duane Nishiie, 58, and former officer of the Korean Ministry of Defense, Seung-Ju Lee, 50, helped the company win two contracts within a massive US Army relocation project in 2008 and 2010.

The Department of Justice said the two used the bank account of Lee and other Koreans to hide the bribe.

The Associated Press reported that in 2012, Nishiie left his job to instead lobby Defense Department officials for construction projects on behalf of the Korean company.

He is currently in custody at the Federal Detention Center in Hawaii. He pleaded not guilty while the Korean ex-officer has yet to enter a plea.

None of the Korean company's employees or officials have been charged yet.