Khadija Ismayilova Among the 4 Recipients of the “Alternative Nobel Prize”

Azerbaijani investigative reporter Khadija Ismayilova is among this year’s recipients of the Right Livelihood Award - also referred to as the “Alternative Nobel Prize” - which honors daring endeavors in human rights, public health and good governance. 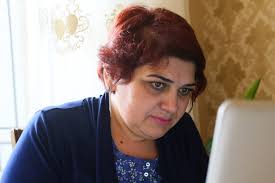 The Laureates protected the rights and lives of citizens across three continents and their work for human rights, public health and good governance has tackled “some of the world’s most pressing challenges at their very core,” the foundation said on its website.

“At a time of alarming setbacks for democracy, their successes show us the way forward towards a just, peaceful and sustainable world for all,” it said.

The four were selected from a pool of 102 nominations from 51 different countries. Niguissie, Ismayilova and Gonsalves will share a prize of three million Swedish kronor (around US$ 371,000).

Ismayilova has revealed high level corruption in her country, including opaque activities and contracts linked to the Azerbaijani president’s family members.

Despite a campaign of intimidation and harassment staged against her, she has shown “courage and tenacity in exposing corruption at the highest levels of government through outstanding investigative journalism in the name of transparency and accountability,” the award committee pointed out.

The former Radio Free Europe/Radio Liberty program host and senior investigator with the Organized Crime and Corruption Reporting Project spent nearly 18 months in prison after Azerbaijani authorities arrested her in December 2014 on charges that included embezzlement and tax evasion. Her supporters described the charges as politically motivated.

Yetnebersh Nigussie was one of the first three blind female law students in Ethiopia. She co-founded the Ethiopian Center for Disability and Development in 2005 and now works at the international organization Light for the World which advocates for an inclusive society enabling persons with disabilities to fully exercise their rights.

Colin Gonsalves is Senior Advocate at the Indian Supreme Court and Founder Director of the Human Rights Law Network (HRLN), established in India in 1983. He has been striving for decades for the promotion of the rights of the most vulnerable in Indian society.

He is particularly known for winning in 2001 a landmark case before the Indian Supreme Court which ordered the allocation of a free midday meal for all schoolchildren and subsidized grain for over 400 million Indians living below the poverty line.

The committee also gave an honorary mention to Attorney Robert Bilott “for exposing a decades-long history of chemical pollution, winning long-sought justice for the victims, and setting a precedent for effective regulation of hazardous substances.”

Bilott represented 70,000 Americans in a class-action lawsuit for the damages caused by the contamination of drinking water with Perfluorooctanic acid (PFOA) by chemical producer DuPont.

Ismayilova will most likely not take part in the award ceremony on December 1, as authorities in Baku have banned her from traveling anywhere since her release.

Created in 1980, the Right Livelihood Award was set up to “honor and support courageous people and organizations that have found practical solutions to the root causes of global problems.”