Serbia’s Defense Minister, Aleksandar Vulin, told the country’s anti-corruption agency that his wife’s aunt from Canada lent the couple US$ 245,000 to buy their Belgrade apartment, but submitted unconvincing evidence for his claim, Crime and Corruption Reporting Network (KRIK) reported Monday. 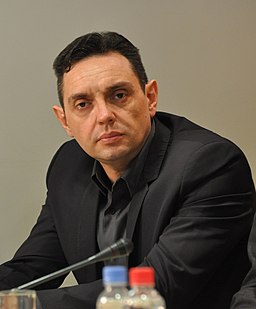 Vulin and his wife Natasa bought the flat in 2012 and he first told the agency that he paid it with money he received from the sale of his property in Novi Sad, a city in northern Serbia.

KRIK uncovered that he sold the one-bedroom apartment in Novi Sad to his brother for €38,000 (US$ 45,500) after he received it as a gift under unexplained circumstances.

The anti-corruption agency contended that Vulin couldn’t have even paid for the first installment of his Belgrade property with the small proceed that he received from his brother and pushed him for another explanation.

This time, Vulin told the agency that he borrowed €205,000 (US$ 245,000) from his wife’s aunt in Canada, handing as proof a ten-year loan agreement, signed by his wife, confirming that she received the money. The signature from the purported aunt in Canada was missing, however.

Vulin further submitted a document with the signature of the apartment’s seller who lives in Marbella, a city in Spain notorious for money laundering, claiming that he paid off the apartment a day after the contract was verified. But Vulin’s account number was missing and the agency deemed the document invalid.

The thousands of euros in cash that Vulin claims his wife’s aunt lent the couple couldn’t have passed international borders without being declared to customs and without an explanation of the origin of the money, KRIK remarked.

The law states that a maximum of €10,000 (US$ 11,900) can be brought into the country without being declared – anything over that amount is a crime.

Vulin became Serbia’s Defense Minister in June 2017 after holding terms as Minister of Labor, Employment, Veteran and Social Policy, and as director of the Office of Kosovo and Metohija. As a public figure, he is obliged to report his income and assets to the anti-corruption agency including the alleged money owed to his relative in Canada, according to KRIK.

“Even if it’s all true,” the director of the anti-corruption agency Tatiana Babic said in a statement, “if the apartment was in fact bought with borrowed funds, it raises the question about the couple’s ability to pay off the debt given their reported incomes.”

The anti-corruption agency brought Vulin’s case to the Prosecution for Organized Crime in Belgrade but the case was dropped in mid-August, citing insufficient evidence that the minister had committed a crime.