Germany Probes Reports about US Weapons Transfers to Syria over Germany

German authorities will launch an investigation into media reports claiming the US flew weapons for Syrian rebels through the Ramstein air base behind Germany’s back. 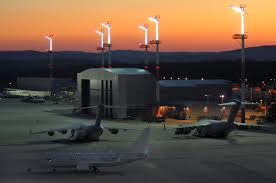 Ramstein air base in Germany (Photo: Kenny Holston, CC BY-SA 2.0)The move came after the investigative journalists from the OCCRP, BIRN, and the Sueddeutsche Zeitung published fresh information linking the US air-base Ramstein in Germany to Pentagon’s huge operation to buy up vast quantities of Soviet-style weapons in Central and Eastern Europe and sending them to Syrian rebels fighting the Islamic State in Syria.

The investgation revealed earlier this week how the Pentagon re-routed its weapons supply-line to Syria after officials in Berlin became concerned at the surge in arms being transferred through US bases in Germany.

The public prosecutor in Kaiserslautern - the closest city to the US Ramstein base - said Thursday, his office will check whether the US military failed to properly declare the movement of weapons from Central and Eastern Europe through Ramstein.

The prosecutor will determine if there is sufficient evidence of a criminal offence which would then call for a more extensive investigation.

The German government insists it had no knowledge of the movement of weapons to Syria.

German laws say that licences to transport weapons must be accompanied by end user certificates which state the final destination of the shipment as well as who will be using the equipment.

According to the German government, no licences have been issued for deliveries to Syria or neighbouring countries since 2010.

However, press reports in Serbia claimed already in December 2015 that a number of US air force C-17 cargo planes had delivered Serbian weapons to the Ramstein airbase.

A government spokesperson said at a press conference in Berlin on Thursday that he learned of this reading the Süddeutsche Zeitung.

However, there were ways to find out about this before.

A 2013 court case in California between the Pentagon and private sub-contractors who took part in the operation, revealed how Bulgarian weapons were due to be delivered by truck to Ramstein before their onward journey to an unnamed destination.

A Buzzfeed investigation linked the delivery to the CIA’s burgeoning campaign to arm anti-Assad rebels at the time.

Germany’s ignorance of deliveries to the Middle East is perhaps not a surprise as Pentagon’s end user certificates for weapons destined for Syria made no mention of the Middle Eastern country.

Reporters who inspected the certificates saw that they said the equipment would be used by the “US government.” They did, however, allow for the goods to be transferred to unspecified “partner forces”.

The Pentagon maintains it does not "store or transit" equipment bound for Syria through German bases but has repeatedly declined to say whether it did so before.