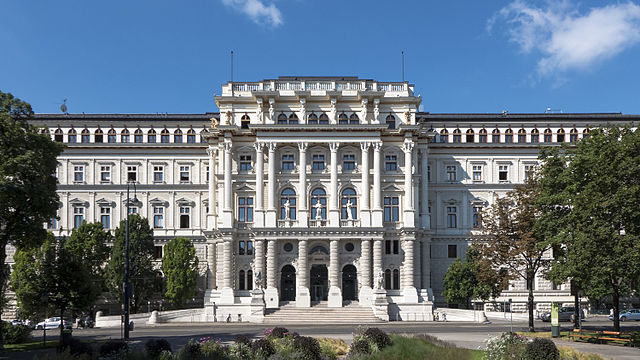 The Supreme Court in Vienna (Photo: Peter Gugerell CC0 1.0)Aslan "Dzhako" Gagiev, is suspected of creating an organized crime group that operated in Moscow and North Caucasus regions between 2005 and 2010. The gang’s victims include government officials, prominent businessmen and bankers, according to Crime Russia.

His extradition was originally approved last November by a regional court in Vienna. In April, however, the country’s Supreme Court postponed the decision indefinitely in order to clarify the conditions he would face in detention in Russia, TASS reported.

However, Judge Leo Levnaik-Ivansk upheld the decision Tuesday, stating Russia had guaranteed Gagiev would face neither torture nor human rights violations upon return.

Viennese police arrested Gagiev in January 2015 after Interpol informed Austrian authorities that he was suspected of hiding in the country. The Austrians, however, reliesed him on bail this March.

The request for his extradition focused on a specific period of his criminal activities in North Ossetia, where he is accused of forming a crime group and of committing six murders himself, according to Crime Russia.

Bulgaria had also sent an extradition request, where he is accused of forging documents. At the time of his arrest, he was found to be in possession of a counterfeit Bulgarian passport.

Gagiev’s extradition is the latest blow to his gang, which once counted more than 46 members and claimed the lives of regional mayor Vitaly Karayev and the Vice Premier of North Ossetia, Kazbek Pagiyev, according to TASS.

So far 17 members of the gang have been sentenced to long prison terms, with 14 remaining in custody and a further eight appearing on international and federal wanted lists, according to Crime Russia.

In August 2016, two former senior officers from a specialist unit in the Ministry of Internal Affairs were found to be members of the group and charged with the abduction of at least six people who were then killed, Kommersant reported.

In one incident, Andrei Sankin and Victor Pronin dressed up as police officers and abducted two vodka businessmen from a Moscow café. The victims were then taken to the office of a company belonging to Gagiev, where they were strangled and their bodies dismembered.

The last member to be convicted was Alexander Staikhevich, who in August was sentenced to 18 years in a strict-regime colony for complicity in the murder of 16 people, according to Crime Russia.