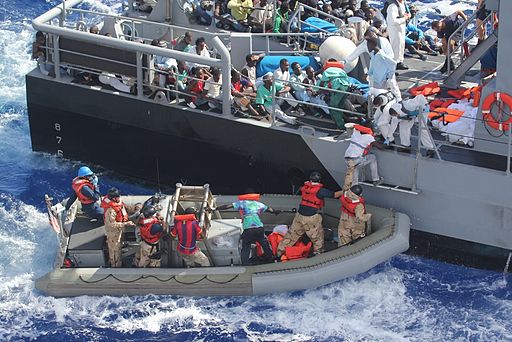 Distressed persons are transferred to a Maltese patrol vessel (Photo: US Navy)Anonymous sources told Reuters that the so-called Brigade 48 is made of civilians, police and military personnel and that it is operating in Sabratha, 70 kilometer west of Tripoli.

The town was considered to be one of the main departure points for people smugglers but migrants rescued last week in the Mediterranean reportedly confirmed that conditions in Sabratha had changed.

"They said it was very difficult to depart from Sabratha," International Organization for Migration (IOM) spokesperson Flavio Di Giacomo, told the agency.

"There are people stopping the boats before they set out, and if they get out to sea they’re immediately sent back," he said.

The group is allegeldy also running a detention center for those who are taken or turned back by smugglers.

July and August are typically the peak months for Libyan smugglers sending boats to Italy, thanks to good sea conditions.

However, IOM reported Tuesday that arrivals in Italy from North Africa this July dropped by over 50 percent from July 2016.

Mohamed al-Muntasser, a Libyan political analyst, told the New York Times last week that an armed group called ‘National Guard, Sabratha Branch’ has played a key role in persuading or coercing smugglers to suspend their operations, and that it has links to the UN-backed Libyan government.

"Some of our forces and our officials have decided that they will tighten the screw a bit – either by doing their job or by telling their friends and relatives in the criminal fraternity that they should stop, at least for a little while," Muntasser told the New York Times.

Sabratha-based smuggler Mourad Zuwara also reportedly told the paper that local forces had recently forced him to abandon his operations.

Organized crime groups in Libya and Italy have profited from the migrant crisis in a variety of ways.

By 2015, trans-Saharan migrant smuggling networks were making more than US$ 300 million a year in Libya alone, according to the Huffington Post.

In April, it emerged that hundreds of African migrants and refugees were being sold openly in modern-day slave markets across Libya, Al Jazeera reported.

In May, Italian authorities arrested 68 suspected members of the ‘Ndrangheta mafia group for embezzling over €30 million (US$ 35 million) of state funds while it ran the country’s largest immigration center.

In July, an armed group aligned to the Libyan government forced out a militia that controlled the smuggling of Bangladeshi and North African migrants through Tripoli’s Mitiga airport, according to Reuters.

According to Libyan and European officials, a militia that controlled the smuggling of Bangladeshi and North African migrants through Tripoli’s Mitiga airport was forced out by a GNA-aligned armed group at the start of July, Reuters.

So far this year, an estimated 97,931 migrants have arrived in Italy by sea, while an estimated 2,244 people have died trying, according to the IOM.