US: Extradited Lithuanian Man Pleads Not Guilty in US$ 100 million Fraud Case

A Lithuanian man accused of conning Google and Facebook out of over US$ 100 million through an email fraud scheme pleaded not guilty in a US court on Thursday, Reuters reported. 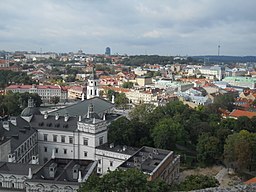 Vilnius, Lithuania (Photo: David Holt, CC BY-SA 2.0)Evaldas Rimasauskas, 48, of Vilnius, Lithuania allegedly defrauded Google out of US$ 23 million and Facebook out of US$ 99 million by posing as Taiwanese manufacturer Quanta Computer Inc. - an established supplier of the two US companies.

Through email, he allegedly convinced both companies to transfer money owed to the manufacturer to accounts controlled by a Latvian firm with the same name, according to a Lithuanian court that ordered his extradition earlier in August.

Rimasauskas allegedly ran the scheme between 2013 and 2015 where he forged invoices, contracts and letters that appeared to have been signed by executives at the victim companies and labeled them with fake corporate stamps bearing the companies’ names.

He was arrested in March.

"We'll follow the procedural run of the case and make sure he gets a good defense," Rimasauskas's lawyer, Robert Peabody, told reporters after the plea.

The alleged scheme, known as “business email compromise,” is growing in popularity according to the US Department of Justice.

Acting US Attorney, Joon H. Kim, said at the time of Rimasauskas’s arrest that the case "should serve as a wake-up call to all companies — even the most sophisticated — that they too can be victims of phishing attacks by cyber criminals."

Rimasauskas is facing 20 years in prison - a maximum sentence for wire fraud and money laundering. He could also face at least two years in prison if found guilty for identity theft.

He did not ask for bail and remains in custody.