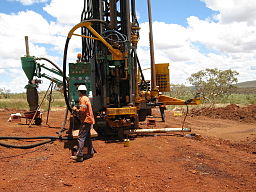 Iluka Resources found evidence that Sisay, who is one of the most powerful men in West Africa and is vying to become Sierra Leone’s next president, approved a AUD$110,000 (US$ 86,000) bribe payment funneled via a West African logistics company, Imatrix 101 Ltd.

"Although these licenses did not have value attributed to them during the acquisition process, and while the outcome of the re-application is not financially material to Iluka, the company considers it is vitally important to be 'walking the talk' in relation to expected standards of conduct," Iluka's chairman Greg Martin said.

Iluka Resources said Wednesday that the bribery scandal involving Sierra Rutile was unlikely to have a material impact on the company.

The failure to impose lighter measures on companies that self-report corruption is seen as a shortcoming in Australia’s system. If the bribery was disclosed in the US, by contrast, Iluka might stand a greater chance to mitigate sanctions or prosecution.