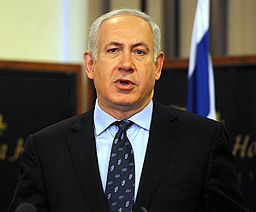 Benjamin Netanyahu (Photo: Cherie Cullen)Netanyahu allegedly accepted thousands of pounds worth of lavish gifts from a billionaire Hollywood producer. In a separate case, he is also accused of swaying media coverage by offering commercial favors to Israeli newspaper owner Arnon Mozes.
Netanyahu’s spokesperson denied the accusations.
“We completely reject the unfounded claims made against the prime minister. The campaign to change the government is under way, but it is destined to fail, for a simple reason: there won’t be anything because there was nothing,” a statement said.
The allegations come a day after his wife, Sara was again interviewed by police in a separate case relating to household costs at the couple’s residence.
The two new investigations stack on top of an ongoing one, involving members of Netanyahu’s inner circle who are suspected of having paid bribes to try to secure Israel's purchase of German submarines and naval vessels.
Investigators are trying to persuade Netanyahu’s former chief of staff to testify against him, the Guardian noted.