Novaya Gazeta Urges Russia not to Deport their Reporter to Uzbekistan

The Russian newspaper Novaya Gazeta said Wednesday that it will try to appeal a court ruling that orders the deportation of an asylum seeking journalist back to Uzbekistan, where he faces torture and persecution.

Khudoberdi Nurmatov - better known by his journalist alias Ali Feruz - fled to Russia in 2008 after he was tortured for two days by officers of the Uzbek National Security Service who wanted him to become a secret informant. 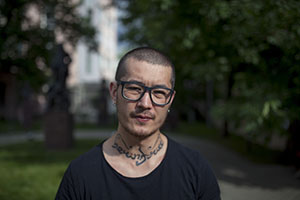 "We are seriously concerned that his deportation to Uzbekistan may turn into a tragedy," the newspaper staff wrote in a collective letter.

"We believe that if the Russian authorities for unknown reasons don’t want him to be in our country he has to be allowed to leave for any other country of his choice."

The ethnic Uzbek was born in Russia but moved to Uzbekistan at the age of 17 and took Uzbek citizenship.

He has been writing for OCCRP partner Novaya Gazeta since 2014, mainly about Central Asian migrants in Russia, and volunteering for a non-governmental organization that helps refugees.

In 2012, Feruz’s identification documents were stolen on a train. Fearing arrest if he appeared at the Uzbek embassy in Moscow to request new documents, he applied for asylum in Russia but was repeatedly rejected and repeatedly appealed, the paper wrote.

He was arrested on August 1, while heading to his singing class. The same day, the Moscow City Court ruled that he had violated "the rules of entry or stay in the Russian Federation" and ordered his deportation to Uzbekistan.

Upon receiving a copy of the judgement, Faruz slit his wrists, but was saved.

"Ali Feruz is openly gay, a human rights activist and a correspondent for the independent Novaya Gazeta newspaper. This is a near-lethal combination for someone who is about to be handed over to Uzbekistan, where 'sodomy' is a crime and torture is endemic," said Denis Krivosheev, Deputy Director for Europe and Central Asia at Amnesty International.

The Journalist Trade Union launched a petition calling on Russia to allow the journalist either to stay in the country or leave for another that would be willing to take him.