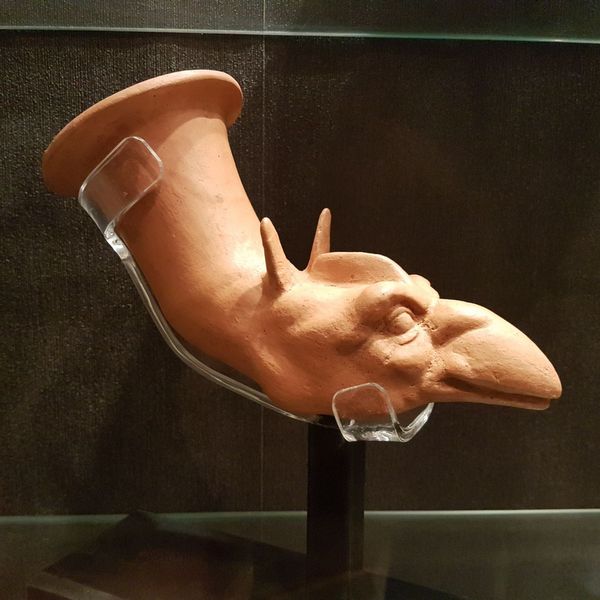 One of the artefacts seized in East Jerusalem (Photo: Israel Antiques Authority)After a joint investigation with US authorities, Israeli police announced that they had arrested the five Palestinians on suspicion of tax offences, money laundering and the forgery of invoices and receipts.

But at a court hearing later that day, police revealed that the crimes were connected to an alleged scheme involving US$ 20 million worth of antiques sold to Hobby Lobby president Steve Green over the last seven years, NPR reported.

The dealers’ fraudulent invoices would then help Green to receive large-scale US tax returns, who then paid them kickbacks in return.

The arrested dealers are reportedly key figures in Jerusalem’s antiquities market, one a member of the Baidun family – who have traded ancient artefacts since the 1930s, according to NPR.

During the raids on their shops and homes, authorities seized ₪800,000 (US$ 224,000) in cash and two black luxury Audi vehicles, along with Hellenistic and Roman sculptures, murals, pottery, figurines and coins.

Also confiscated were papyrus fragments from the Egyptian Book of the Dead, a fresco of swimming fish from Pompeii, ancient weapons and parchment written in Hebrew, Aramaic, Greek and Latin.

Some of the antiquities are believed to have been smuggled into Israel, the only Middle Eastern country with a legal antiquities export trade, yet regulations in recent years have been tightening. Dealers typically take advantage of a legal loophole that allowed them to import items into Israel from Dubai, according to NPR.

Earlier this month, Steve Green paid US$ 3 million and forfeited thousands of artefacts that had been smuggled out of Iraq and intentionally mislabelled on import into the US.

According to the court document, an expert on cultural property law had in 2009 warned Hobby Lobby that the artefacts it was interested in acquiring and already owned may have been looted from Iraqi archaeological sites.

Nevertheless, Hobby Lobby purchased over 5,500 artefacts the following year for US$ 1.6 million, despite receiving conflicting information as to their origin. The company payed for these items by wiring the money to seven personal bank accounts held in the names of individuals other than that of the dealer.

The antiques were then shipped from the United Arab Emirates to three different corporate addresses in Oklahoma City, where Hobby Lobby are based, misleadingly labelled as "ceramic tiles" or "clay tiles (sample)" and declaring their country of origin as Turkey.

The investigation began in 2011, when Hobby Lobby received some 1,000 clay bullae as part of the same purchase, shipped by an Israeli dealer and falsely declaring their origin as Israel rather than UAE, according to Al Jazeera.

The Green family, who own Hobby Lobby, are evangelical Christians who plan to display their enormous collection of biblical antiques in their Museum of the Bible in Washington D.C.

In July, the EU announced plans to crackdown on antique smuggling into the continent, which are often looted from ancient sites like Palmyra and then used to finance terrorist groups.

To skirt the EU-wide ban on goods imported from Iraq and Syria, organized crime groups and dealers would simply smuggle the antiquities through third countries and create a false paper trail – otherwise known as "port-shopping".