The largest criminal marketplace on the dark web for the illicit trade of drugs, firearms, computer hacking tools and more was shut down Thursday, the US Department of Justice (DOJ) announced. 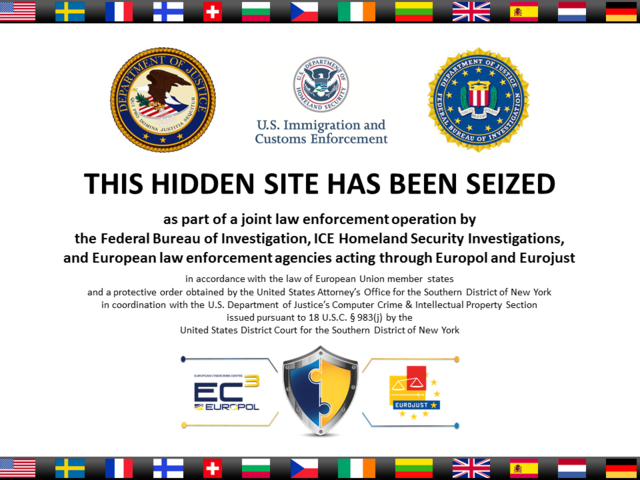 AlphaBay was hosted on the dark web, a hidden part of the internet that users require special software to access. One of the most common ways to access the dark web is by using a browser called Tor, which prevents network surveillance and essentially renders a user anonymous online.

Financial transactions between users on AlphaBay were conducted using cryptocurrencies, namely Bitcoin, Monero and Ethereum, according to the DOJ. Authorities believe the site was used to launder hundreds of millions of dollars from such illegal transactions.

AlphaBay was also linked to multiple overdose deaths in the US as a "major source" of fentanyl and heroin, The Independent reported.

The investigations that led to Thursday’s seizure of AlphaBay and Hansa, another major criminal market on the dark web, were led by the Federal Bureau of Investigation (FBI), the US Drug Enforcement Agency and the Dutch National Police, according to Europol, which also supported the operations.

Law enforcement agencies in Thailand, Lithuania, Canada, the UK and France also cooperated in the seizure of AlphaBay and Hansa’s digital infrastructure.

"Whether they operate in broad daylight or on the dark net, we will never stop working to find and stop these criminal syndicates."

Authorities were able to take AlphaBay down in early July when they took the site’s alleged founder Alexandre Cazes into custody, The New York Times reported.

Cazes, 25, was a Canadian citizen living in Bangkok, Thailand. A few days after being arrested, on July 12, Cazes apparently committed suicide.

He was found to have possessed millions of dollars in cryptocurrency and luxury assets around the world, including expensive vehicles, residences and a hotel in Thailand.

By comparison, the marketplace’s scope dwarfed the former largest illegal dark web exchange called the Silk Road, which was taken down in 2013 and had about 14,000 listings.

However, the authorities’ fight against dark web markets is likely to continue.

In the wake of AlphaBay and Hansa’s seizure, NBC News reported a spike in traffic to a former competitor of the two marketplaces called DreamMarket, which might now enjoy a corner on the illegal market.