South African "Crusader in the Fight Against Corruption" Assassinated

South African politicians have claimed that a local councillor, gunned down just weeks after receiving a death threat, was killed for her "fight against corruption", local media reported Tuesday. 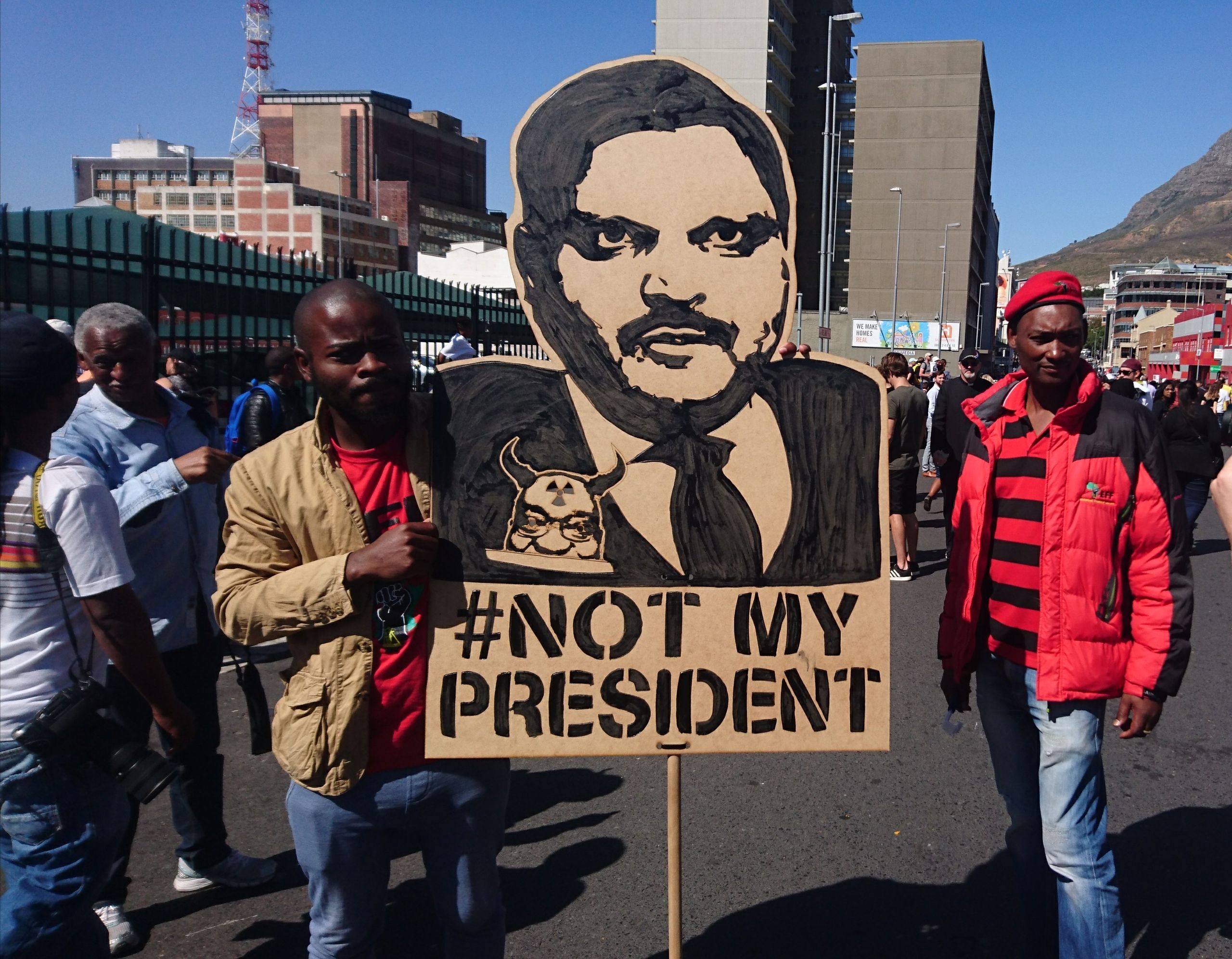 Anti-Gupta and Zuma Protesters in Cape Town (Photo: Discott CC BY-SA 4.0)Thozama Njobe, 46, the speaker for a local municipality in Fort Beaufort, Eastern Cape, was allegedly shot in her car at close range just 50 meters from her home on Monday. She was rushed to hospital but was declared dead upon arrival.

South African police immediately launched a manhunt for her killer but refused to speculate on a motive.

Oscar Mabuyane, the provincial secretary from Njobe’s party - the African National Congress (ANC) – told News24 Tuesday that a stranger had visited Njobe’s office several weeks ago while she was at a party policy conference.

"He told those in the office that he had been hired to assassinate her. Sometimes we don't believe these things, but it was reported to police and they did absolutely nothing," he said.

Mabuyane believes that her death was politically motivated. He says the visitor claimed that he had come to confess as he was scared to commit the murder, according to the Daily Dispatch.

Mabuyane described Njobe as a dynamic and energetic "anti-corruption" champion. In a statement to the Daily Dispatch, the party’s regional secretary Teris Ntutu said that her "life was defined by her continued activism."

In the wake of her death, other politicians and political parties have spoken out over their suspicions regarding a motive.

"She was a crusader in the fight against corruption and this could possibly have led to her death," said Nomvano Zibonda, the head of ANC’s opposition Democratic Alliance (DA) in the same municipality as Njobe, the Daily Dispatch reported.

The South African Communist Party spokesperson Siyabonga Mdodi likewise said "we condemn this atrocious act of what appears to be an assassination. We hope this is not linked to factional proxy battles and politics of rent-seeking in the ANC."

Njobe’s ANC party has been in power ever since Nelson Mandela was elected as president in 1994.

But current president Jacob Zuma, also ANC, found himself at the center of an enormous corruption scandal after a trove of leaked emails revealed that the Guptas, a powerful Indian-born family from the ruling elite, bought and bribed their way into the presidency.

They are accused of repurposing state institutions to consolidate their power and run what BBC Newsnight called a "shadow state".

"These emails show the scale of money laundering, the proximity to power, the extent to which this family [the Guptas] hold sway over the president and those closest to him," amaBhugane investigative journalist Micah Reddy told the BBC.

And on Tuesday, ANC MP Makhosi Khoza announced that she had less than a month to live, Independent Online (IOL) reported.

Khoza said she received a series of death threats after publically pushing for Parliament to hold a no-confidence vote against President Zuma.

On her Facebook account she posted screen grabs of the death threats, warning her against pushing for the secret ballot.

"This time around, you should do what is best for yourself," read one, while another read "I will find you and I will kill you. You have 21 days before you die."

In response, Parliament said Tuesday it would provide extra security for the MP.