US authorities on Friday requested the seizure of a US$ 50 million Manhattan condominium and a US$ 80 million yacht from two Nigerian businessmen because they allegedly bought them with money they made by bribing a former Nigerian oil minister. 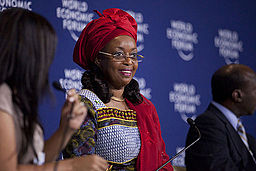 Diezani Alison-Madueke (Photo: World Economic Forum, CC BY-SA 2.0)The US Department of Justice filed a civil complaint seeking the forfeiture and recovery of approximately US$ 144 million which businessmen Kolawole Akanni Aluko and Olajide Omokore made from 2011 to 2015 from lucrative oil contracts they secured after paying millions to Nigeria’s former oil minister, Diezani Alison-Madueke.

They allegedly used the profits to purchase various assets including the condominium on a street in Manhattan known as “Billionaire’s Row,” as well as the super-yacht “Galactica Star.”

“Business executives who engage in bribery and illegal pay-offs in order to obtain contracts create an uneven marketplace where honest competitor companies are put at a disadvantage,” Assistant Director Andrew Vale of the FBI’s Washington Field Office said.

The lawsuit said that the companies owned by Aluko and Omokore dodged their US$ 120 million entry fee obligation and in some instances failed to perform services under the contracts, but nevertheless received more than US$ 1.5 billion in revenues through the sale of crude oil.

Former minister Alison-Madueke was charged with money-laundering in April after allegedly bribing election officials over a million dollars to vote for President Goodluck Jonathan in the 2015 elections.

She previously denied to Reuters any wrongdoing when questioned about corruption allegations.

The case is part of a larger US government initiative to forfeit the proceeds of foreign official corruption and when possible to use the recovered assets to benefit the people harmed by the wrongdoing.