A Kazakh tycoon who was sentenced to 21 years in prison for attempting a coup faced the judge again on Wednesday, this time for tax evasion, accounting fraud, and bribery, Tengrinews reported. 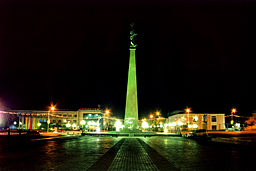 Ordabasy Plaza Shymkent, Kazakhstan (Photo: Rassim, CC0 1.0)Tokhtar Tuleshov, the ex-owner of the Shymkent beer factory, and eight others are accused by Prosecutor Zhasulan Adilbayuly of evading taxes and other liabilities worth 1.2 billion tenge (US$8.8 million) that Shymkentpivo had to pay between 2011-2015, according to Bnews.kz.

Among the accused are his former employees as well as public officials who allegedly received bribes in return for letting him get away with the fraud.

According to charges, Tuleshov at some point took 4.3 billion tenge (US$29.6 million) from the company’s funds and then ordered his employees to fiddle with the financial statements in order to hide the amount from tax authorities.

The defendants appeared in front of the Yenbekshi District Court in Shymkent, a city in southern Kazakhstan.

Tuleshov’s legal defender Markhaba Jakupova said that her client denied most of the charges and reckoned them groundless, as quoted by 365info.kz on July 10.

Tuleshov was arrested in January 2016 for illicit possession and distribution of drugs and financing an organized crime group.

The investigation by the Committee for National Security revealed that the businessman had supported mass protests against land reform that took place in Kazakhstan in spring 2016 although he had been in detention at that time.

In April and May thousands of people in different cities across the country took to the streets against amendments to the Land Code that would allow foreigners to buy and lease farmland.

Nationwide riots were unprecedented for Kazakhstan, where public criticism of state policies isn’t tolerated. Dozens of protesters were detained and faced trials.

Tuleshov was found guilty for financing the land protests in a bid to destabilize the situation in the country and seize power.

Last November he was sentenced to 21 years in prison for a coup attempt and organizing a crime group, according to RFE/RL.