A former business associate of President Donald Trump has agreed to cooperate in an international money laundering investigation targeting a Kazakh family whom he helped make real estate deals with Trump, the Financial Times reported Thursday.

The Russian-born Felix Sater is a "career criminal" with alleged ties to Russian and American organized criminal groups, Bloomberg reported. 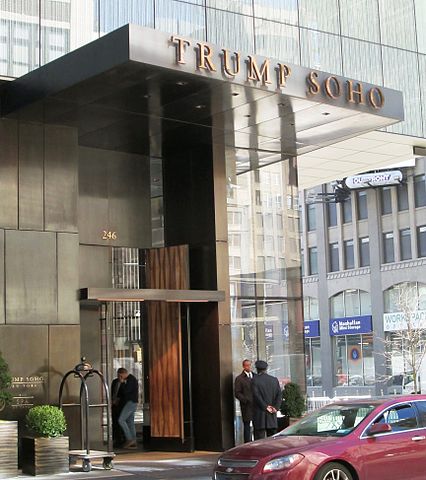 Trump Soho in Manhattan (Photo: Beyond My Ken, CC BY-SA 4.0)

Sater formerly worked at a real estate development firm called the Bayrock Group, which partnered with Trump and his children Donald Jr. and Ivanka on several deals between 2002 and about 2011, the outlet claims.

Most notably, Bayrock partnered with the Trumps on the construction of the Trump Soho hotel and condominium in Manhattan.

Bayrock also once had an office in Trump Tower, in Midtown Manhattan, two floors beneath Trump’s own.

Trump has repeatedly insisted that he barely knows Sater despite the accounts of former Bayrock employees who say the two men met frequently while Sater worked for the company.

Bloomberg also reported that Sater used to carry a Trump Organization business card and once accompanied the now-president and his children to Moscow.

In October, the Financial Times reported that Sater had helped the family of Viktor Khrapunov invest millions of dollars in US real estate through front companies – including buying apartments in Trump Soho.

Now, Sater has turned on the Khrapunovs and is cooperating with lawyers and private investigators pursuing civil cases against the family across three continents, according to the Financial Times’ Thursday report.

Trump is not the primary focus of the investigation, but the development comes as Special Counsel Robert Mueller is looking into money laundering by his associates, The New York Times reports.

Khrapunov is the ex-mayor of Almaty, Kazakhstan’s largest city, and a former energy minister. His family is accused of "cleaning" illicit money by purchasing and quickly selling luxury US properties, like the Trump-branded condos Sater helped them buy, according to a joint investigation by McClatchy and the Organized Crime and Corruption Reporting Project.

Both Viktor Khrapunov and his son Ilyas face money laundering charges in the US and charges in Kazakhstan. Ilyas’ father-in-law, Mukhtar Ablyazov, also faces Kazakh criminal charges over US$ 10 billion that disappeared from the bank he owned until it was seized by regulators in 2009.

The three men maintain that they are the victims of political persecution by Kazakh President Nursultan Nazarbayev.

The mounting evidence of Trump’s ties to individuals accused of money laundering is raising questions about the precautions he’s taken to discourage the investment of illegally-obtained funds into his global real estate empire.