Chinese-led organized criminal networks have turned an obscure southern port town into the world’s largest hub for ivory trafficking, according to a report published Tuesday.

The Environmental Investigation Agency (EIA) found that organized crime syndicates operate "with complete impunity" in Shuidong, Guangdong province, which has become a major transfer point for illegally-poached ivory smuggled from Africa over the past two decades. 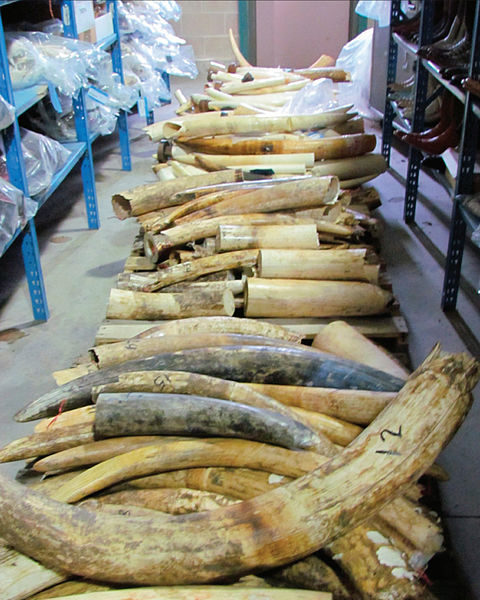 One criminal group EIA spoke to as part of its investigation, which started in 2014, claimed that up to 80 percent of tusks from elephants poached in Africa pass through Shuidong.

The same group said that it was just one of 10 or 20 criminal networks operating a transnational smuggling scheme from Shuidong.

The Shuidong syndicates overtook Fujian gangs as the main raw ivory traffickers more than a decade ago, and originally smuggled most of their ivory from Tanzania. But after Tanzanian enforcement against poaching was tightened, the groups shifted their sourcing to neighboring Mozambique.

"By being flexible and adaptable, the Shuidong syndicate is relentless in its pursuit of profit from wildlife crime," the report reads. "Their relentless criminal activities continue to be a major factor in the ongoing slaughter of elephants and other wildlife across Africa."

The Chinese government announced a ban last December on all ivory trade and processing activities to go into effect by the end of 2017, the BBC reported. And while the EIA report acknowledges that the country has made progress toward that goal, it warns that the lack of enforcement action against organized criminal groups undermines efforts to shut down the ivory business.

In Zanzibar, Tanzania, EIA investigators learned from a sea cucumber trader and Shuidong native how the syndicates orchestrated shipments of tusks to China. The groups relied on a trusted network of Tanzanians who sourced, transported and stored ivory in safe locations until it was ready to be concealed in legitimate, low-value goods like seashells or agricultural products.

Local Chinese syndicate members posing as sea cucumber traders limited their own contact with ivory, and bribes were paid to customs officers and port officials for safe departure.

Later, undercover investigators posed as potential buyers and developed a relationship with a three-man Shuidong syndicate operating in Pemba, Mozambique. Leveraging that connection, the investigators were eventually able to view part of a 2.3 tonne ivory shipment in Shuidong in October 2016.

"It is vital that enforcement agencies in Africa and China put these criminals out of business immediately," said Mary Rice, EIA executive director, ABC News reported.