The Vikings rose to power in Sicily’s capital city following a series of raids and arrests targeting its rival Nigerian gang, Black Axe, in November 2016. 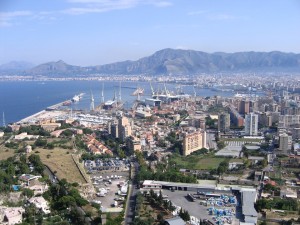 The transnational criminal group started out as a student organization on Nigerian college campuses in the 1980s, the International Business Times UK (IBTimes UK) reported.

An unnamed source in the Italian police told IBTimes UK that there’s a fragile agreement between the Mafia and the Vikings, who benefit from trafficking thousands of Nigerian women into prostitution in Italy.

"There is harmony in Ballaro," the source said, referring to the Palermo neighborhood where the Vikings primarily operate. "Nigerian lookouts posted to watch for the police will alert Cosa Nostra members as well as their own."

It’s likely that the Vikings are paying protection money to the Mafia in return for the territory they run, according to Charlotte Baarda, a researcher at Oxford University’s Extra-Legal Governance Institute.

"But it seems as though the traditional Italian Mafia is quite weak at the moment," she told the BBC.

"A lot of Sicilian mob bosses are in jail, so it would probably be quite easy for Nigerians to take over a lot of territory, and especially in prostitution and migration markets," Baarda said.

The Italian police are having trouble combating Nigerian gangs like the Vikings, according to multiple media reports. It’s difficult to cultivate informants in such a close-knit community, and there’s a shortage of interpreters who can translate wire taps.

More Nigerian migrants arrive in Italy than from any other country, according to the UN’s International Organization for Migration (IOM).

Women only make up 10 percent of the total migrant arrivals to Italy, but the IOM believes that 80 percent of Nigerian women who make it to the country are trafficked into prostitution. About 11,000 arrived last year, which means that as many as 8,800 of the new arrivals could now be under the control of older Nigerian "madams" and their gang bosses.

The debts are assigned to women by trafficking groups like the Vikings, which often kidnap or lure the women into making the dangerous Mediterranean crossing with promises of legitimate work.

Little is currently known about the Vikings’ internal structure, and the Italian police want to contain their control to Ballaro for now, according to the IBTimes UK source.

"If we weaken the Italians, the Nigerians may start to operate outside their own communities, just as the north Africans are now doing in Naples."

Cosa Nostra is allegedly trying to rebuild its base of power in Sicily, Reuters reported Friday.