Prosecutors filed corruption charges Monday against Brazil’s President Michel Temer, claiming that he planned to receive a total of 38 million reals (US$ 11.5 million) in bribes from the country’s largest meat processing company.

The president allegedly already accepted 500,000 reals (US$ 152,000) from JBS South America via an intermediary, according to charges filed by Prosecutor General Rodrigo Janot, The New York Times reported. 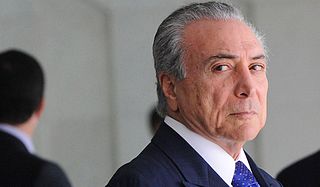 The Federal Police of Brazil announced last week that it had found evidence that Temer took the bribe.

Temer officially took office less than one year ago, after former President Dilma Rousseff was impeached on charges that she illegally manipulated government budgets. His most recent approval rating was just 7 percent.

The new accusations against Temer are the latest in a widespread scourge of corruption in the Brazilian government known as the "Car Wash" investigation, the bulk of which stems from politicians accepting bribes from companies seeking contracts with state-run enterprises.

The president and one-third of his cabinet are already under investigation or charged in such bribes-for-contracts schemes, in addition to four former presidents and dozens of lawmakers, Reuters reported.

In a plea-bargain testimony in April, JBS top executives and brothers Joesley and Wesley Batista said that paying bribes in return for loans from the Brazilian Development Bank and getting tax issues resolved was a key strategy behind the company’s rapid growth, Bloomberg reported.

Both Temer’s office and attorney have declined to comment on Monday’s charges, although Temer continues to deny any wrongdoing, according to multiple media reports.

Whether or not Temer will stand trial is now up to the lower house of Brazil’s Congress, where he is believed to have enough support to thwart the two-thirds majority needed to start legal proceedings.

"Our endemic, systemic corruption has suffered a blow, but the system is very powerful and will find a way to counter prosecution," a federal police union adviser told Al Jazeera.

Even if Temer survives this most recent allegation, Janot, the prosecutor, is separately investigating him for obstruction of justice and racketeering in unrelated cases. Those charges are expected to be filed soon, which would draw out the president’s legal ordeal as Brazil heads toward its next general elections in 2018.